Review of the year 2011: A Magificent Seven 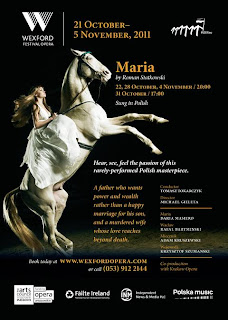 My Personal Selection of the best arts events  of 2011
With 2011 and the new year begun it is time to have a look back at the highlights of 2011 before time dims the memories. There was much to enjoy here at home  and I enjoyed travelling to  events in France and the UK. Here are some of the stand out events I experienced. Click on the enhanced text for my review.

Best Opera Performance:  Maria  Wexford Opera Festival
2011 was a year when I saw all sorts of opera, visiting festivals in Wexford and Aix en Provence. The  thrill of a night at the New York Met production of Anna Bolena  came via satellite to a Limerick cinema   The most fun performance was the  Opera in the Open production of Cosi Fan Tutti in Wood Quay Gardens, Dublin.  but the most surprising was delivered by the young voices of Dublin Youth Opera Theatre right here in my home town of Ennis in their Jukebox opera, Thicker than Water.  I loved  the quirky production of Dido and Aeneas at Cork Opera House but if I have to choose one of the shorter works  I enjoyed the  opera production of Gianni Schicchi directed by Roberto Recchia at Whites Hotel,Wexford.  Despite all that has been written about the state of opera in the country, it is worth noting that Ireland does have opera houses, even if they are outside the Pale, and it is good to see opera being produced in them. My pick for 2011 is the Wexford Opera Production of
Maria  at the Wexford Opera House

I particularly enjoyed a couple of solo gigs this year. I was very impressed with Albert Niland way back in January when he played at Dolan's Limerick. Jimmy Crowley showed what a pro he is at the Sixmilebridge Winter Music Wekend .   Cecile Giraud used her cello to tell her musical biography at the OFF festival at Avignon.   Sid Bowfin aka Adrian Garrett was my favoutite solo act at Spraoi . My pick of solo artists this year though was the veteran folk singer Peggy Seeger also heard at Sixmilebridge. She was truly extraordinary.

Best Band Gig .  Gilbert O Sullivan at the Olympia
Vladimir Jablokov brought his second Classical Twist tour to Glor and Jack L was pretty impressive at the same venue. Declan O Rourke remains a favourite  and we enjoyed some great music at  the triumvurate of independent music clubs , Clare ,Sean Malone's Market Tavern and Frank Hayes Island Music Club and Brendan Walsh of the the Sixmilebridge Folk Club.  Ger Wolfe and De Dannan spring to mind but there were too many to mention. Penguin Cafe and Michael Nyman Band brought their genre bending big bands to Waterford. I heard  rock guitarist, Johnny Fean in two line ups this year and  both great  gigs. The Nervous Breakdowns were great fun at the Tramore Rockabilly Weekend and Francie White did not disappoint at the Imagine Festival Waterford. I am awarding my pick of the band gigs to Gilbert O Sullivan for his gig at the Olympia. An 11 piece band , great visual elements and the songs are holding up well.


Best Choral Performance: Come The Sails Choral Event to mark
the opening of the Tall Ships Festival in Waterford

Colaiste Muire marked their 150th anniversary with a gala choral event. Exeter Cathedral Choir were in Ireland for a short tour and were vocally and visually splendid  in bright red cassocks. Limerick Choral Union delivered their best Messiah yet and the Lismorahaun Singers  delighted their packed house at St Columbas. Further afield the performance of the choral movement of Beethoven's ninth symphony was interesting if only for the rain manoeuvres at the Roman amphitheatre in Orange was  but  my choice choral event for 2011was the performance of a specially commissioned piece to mark the opening of the Tall Ships Festival in Waterford performed by huge choir and orchestra on the Quay.

Best Festival :OFF at Avignon
I loved the simplicity of the Ukuhooley by the Sea in Dun Laoghaire, a one day festival dedicated to that humble instrument, the ukulele. Waterford proved itself a festival town specialist with three terrific festivals, The Tall Ships Festival, Spraoi  and the Imagine Arts Festival .  My home town, Ennis hosted two trad festivals and the excellent  niche Ennis Book Club Festival. My festival pick for 2011 however was the OFF Festival at Avignon, a Gallic version of the Edinburgh Fringe Festival.


Best Musical:  ALLSTARSWARS
Crazy for You at the Novello Theatre, London.  Great singing and dancing and the best looking guys and gals in a feel good nostalgic piece, a reworking of Girl Crazy. I was exhausted just looking at them. The South Eastern Youth Drama production of Les Miserables at the Theatre Royal was also pretty amazing. Hard to believe they were all young amateurs. Watch out for young Glen Murphy who played Jean Valjean but the prize for the best musical for this year goes to another production with strong Waterford involved from director Bryan Flynn, the hurling musical, AllStarsWars and as I write the show is just about to open in Dublin.