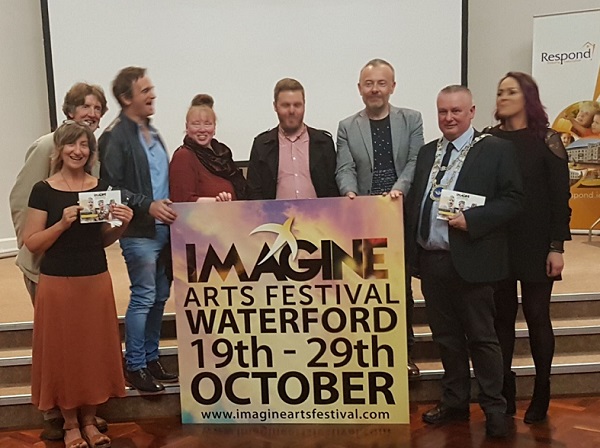 The power of imagination to carry us through life's difficulties was the theme of Eamon Keane's engaging key-note address at the Imagine Festival launch at St john's College. Drawing on childhood reminiscences and his rich and varied career as a broadcaster, musician and counselor, Keane drew in the audience with his easy story-telling style, -recalling his mother Maura Hassett playing Chopin in their council house-an incident of stage fright as a fledgeling virtuoso and his encounters with assorted characters including Nelson Mandela, fiddler John Sheehan and some colourful North Kerry denizens. Describing himself as a musician who fell into journalism, he graciously paid tribute to his WLR colleague Mary O Neill for her arts programme 'giving voice to artists and documenting the local scene'. Hear hear we say! Sadly with no piano in St John's College Oratory, we'll have to wait for another occasion to hear him play
.
Rick O Shea seemed genuinely delighted and excited to be taking on  the direction of Waterford Writer's Week and gave a glimpse of what's in store in the weekend of events in various venues around the city. Mark Roper was on hand to read some of his poems. There were a couple of songs from troubadour Lorcan Reidy and a snippet of Sam Shepherd.

I love the Imagine Festival and often  gravitated back to Waterford for it when I lived away. On a very small budget and with a team of committed volunteers, it presents a range of arts events to brighten up those dark and dull days in late October. While it is works hard to spread the word nationally, I believe the festival aims to serve the local audience first and makes a virtue of its diversity rather than targeting a niche. I do have a quibble though. I found this launch event too long and the scheduling made it awkward for attendees to support the many arts events already happening in the city that evening.  A 6.30pm start wrapping up at 7.30pm would have  facilitated patrons to support the launch and also get to Garter Lane in time for a trad group or to  classical music recitals in the Large Room and Waterford Crystal. And surely there would have been a few takers for a cabaret singer in Theatre Royal. Maybe we could have a diary somewhere where any confirmed events could be posted so planners could see at a glance what is scheduled and avoid those awkward clashes.

Related posts: I was fortunate to hear Eamon Keane and John Sheahan perform together at Listowel Writers' Week some years ago My report here http://cathydesmond.blogspot.ie/2014/06/dublin-kerry-alliance-at-writers-week.html

My Round up of Imagine Festival 2016 http://cathydesmond.blogspot.ie/2016/11/imagine-gfestival-my-roundup-of.html
Posted by Cathy Desmond at 6:58 PM 1 comments

I set out last night to get a flavour of the Culture Night activity in Waterford city.  My experience was good in parts like a curate's egg. Speaking of clergymen, I enjoyed Helen Norton and Jonathan White's witty spin off of Wilde's Importance of Being Ernest. An hour long of crisply enunciated dialogue by the actors in the comfortable space at Garter Lane was a cheerful and well executed theatrical experience and drew a full house. My first stop at the Fat Angel Wine Bar was less successful, I couldn't hear or see any of the four short plays by local authors presented in the small back room and by default joined  the lively chatter in the front room. Gravitating toward Greyfriars, usually a focal point for culture night activity, I was surprised to find the doors to the exhibition at the Municipal Gallery closed and was left with feeling that the buzz and the culture vultures were somewhere else this year. Later I did manage to squeeze into the Oak Room of The Munster Bar for the Mod Poets session. I heard a intense monologue with a bleak theme of post traumatic stress disorder delivered by a very well turned out actress in 50's costume by Anna Jordan and Paul McDonald's ode to his dog.
Posted by Cathy Desmond at 3:28 PM 0 comments

A famine ship and a grand piano seem unlikely co-stars. Add in a distinguished Hungarian diplomat, a pale young man in concert tails and a flock of starlings perched in the rigging as unwitting extras and the scene looked like a setting of a classy spy thriller.  I was on the Dunbrody moored on the River Barrow, Co Wexford for the launch of the 13th New Ross Piano Festival. This year, there is an emphasis on Hungarian repertoire and artists  in the weekend concerts. This year,  artistic director with his formidable team are scheduling  some jazz piano events. Heavyweight on the international scene Enrico Pieranunzi will be in New Ross on Wednesday. Check him out on the video above.
I was pleased to meet chairman, John Kissane who said he particularly loves the chamber music element of the festival. There are loads of attractive programmes and an impressive roster of emerging and established talent in daytime and evening concerts. Check out the details on the festival website www.newrosspianofestival.com. After a few well chosen words by the Hungarian Ambassador, Istvan Phally, there was a little piano music from Sean Morgan Rooney and director of the festival Finghin Collins. As the last notes faded out over the river Barrow, the starlings with a whoosh abandoned the riggings and flew away,. no doubt to return to St Mary's Church when the festival proper begins. 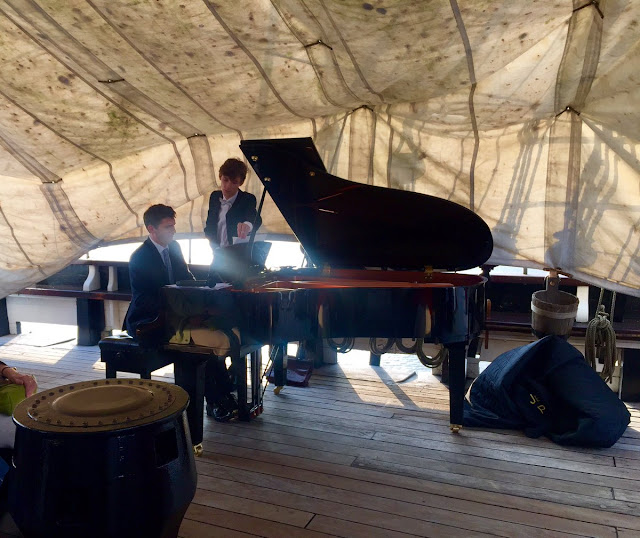