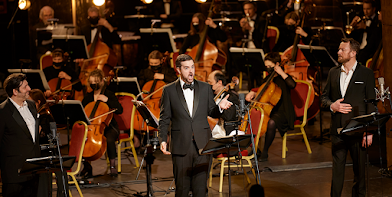 Sometimes less is more. A concert performance of Puccini’s tear-jerker proved to be perfect solace for yet another lockdown Saturday night. Over a year when the archives of the world’s great opera houses were thrown open, you could view the most lavish of productions. Nevertheless, hearing the sound of a live orchestra tuning up for a streamed performance at the BGE Theatre in Dublin’s Grand Canal Dock produced a feeling of happy anticipation and high emotion every bit as strong as the most extravagant Wagnerian moment.

The love story between Rudolfo and Mimi may be the main attraction of La Boheme but it is the rapport between the four male leads that play the house-sharing friends that gives the work its cheerful heart and soul. Irish National Opera presented two new international voices to Irish audiences. Lithuanian tenor Merūnas Vitulskis and Serbian baritione, David Bizic were impressive as Rudolfo and Marcello. They were joined by Irish singers Ben McAteer as Schaunard and John Molloy as Colline. Despite the limitations of the concert format, the quartet gave remarkably credible characterisation and exuded a spirited bonhomie and empathy.

Celine Byrne was splendid as Mimi managing to convey a sense of fragilty while giving full heft to her arias. Anna Devin was delightfully bright and breezy as Musetta.

There was no stinting on the elements that traditionally flesh out this opera. A childrens’ chorus sang from the balcony. A bijou military band occupied the boxes and a 25 strong chorus sang from the stalls. Less dramatic action on stage added an intensity to the colourful score, a feature amplified by having the 60piece orchestra arrayed onstage behind the soloists. That the orchestra looked and sounded marvellous was a testament not only to the Spanish conductor Sergio Alapont but to the sound, lighting and camera crew.

Note: In the online programme notes, newspaper reviews from the Irish premiere in 1897 made for interesting reading. The Freeman’s Journal reported that there was standing room only in the Gaiety at the Irish premiere by the Carla Rosa Opera Co. The Independent reviewer’s tone was cooler, reporting that ‘it were a hard task to conceive a colder welcome for a new work’ describing the audience as ‘cruelly impassive’. Ouch!

Coming to a screen near you...💻🎶
Puccini's #Labohème in a special concert performance, starring @CelineSoprano, livestreamed from the stage of @BGETheatre on 13 March. Tickets are on sale now 🙌