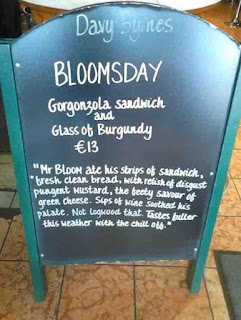 Thursday was Bloomsday and I ventured to Sandycove to join the annual literary shenanigans .  There was a nip in the air but a hardy cluster of swimmers gathered at the 40 Foot swimming spot to bathe in the 'snot green sea'. In the Martello Tower,  there was a profusion of straw boaters and blazers among the audience gathered to hear the premiere of the first of four  scenes from  an operatic version of Ulysses by composer, Eric Sweeney to a libretto adapted by Andrew Basquille . The harp like accompaniment played  by David Bremner with a sprinkling of  sprechstimme gave the piece the feel of a rhapsodic epic There was an cheerful party atmosphere on Main Street in  Glasthule with tables and chairs set up under awnings outside each premises. Bemused Japanese tourists, giggling schoolchildren in bonnets and painted moustaches , celebrity chefs and Mollies galore in their best Bloomsday attire made for a bustling gaiety. The jolliest gathering was outside Quinn's Funeral Home. I hadn't heard Oleg Ponomarev Russian violinist of Loyko fame for a long time but there he was outside Caviston's adding a whiff of the Hot Club de Paris to the proceedings.,


On Sandymount Green, strolling players performed dramatic scenes under the gaze of a bronze WB Yeats for an audience fuelled by hot chips from  Borza's.  Books Upstairs on D'Olier Street has a lovely tea room upstairs where student thespians did their Joycean thing. Finally it was om to Davy Byrne's where sips of Burgundy soothed the palate.

So what that most of us can't claim to have read Ulysses from cover to cover.  I think writer Micheal O Domhnaill writing in the Irish Times on Thursday introduces a note of pretentious snootiness when he refers to 'the profoundly cynical philistinism  of Bloomsday'. Why shouldn't everyone be  a Joycean on this one day in June when dressing up is encouraged and we take fresh delight in the power of language and words renowned all over the literary world. 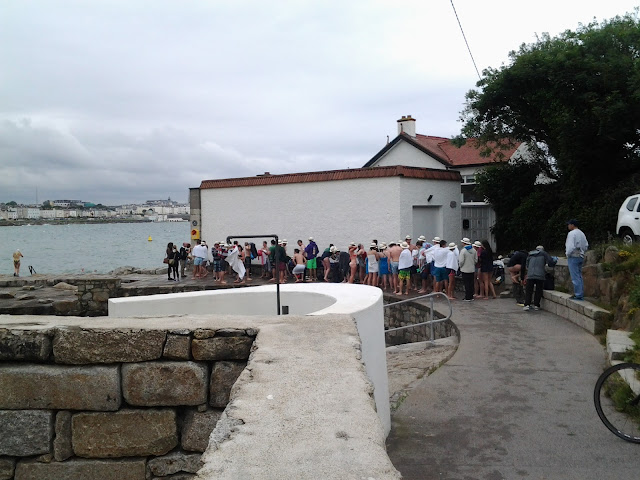 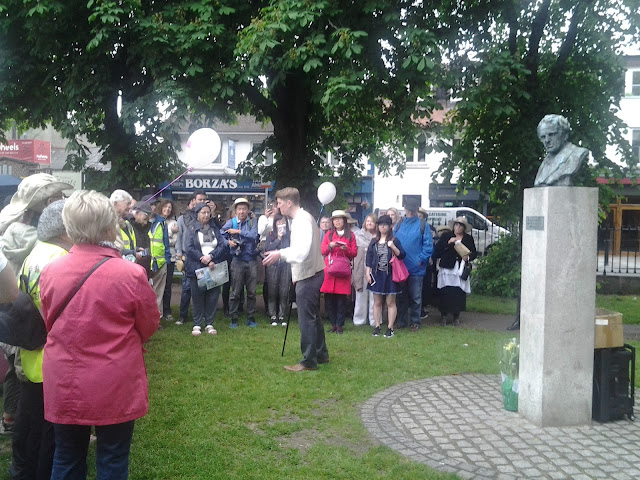 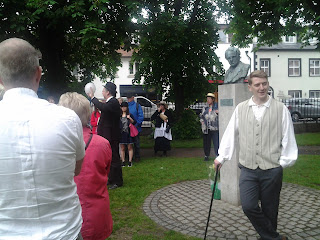 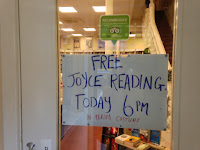 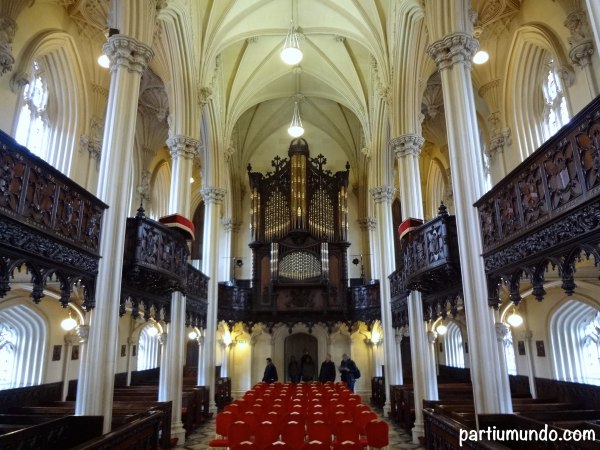 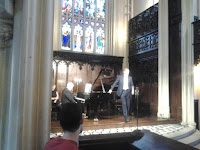 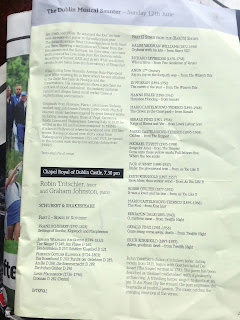 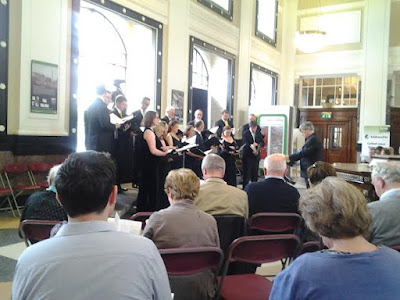 Jazz from Now at Garter Lane

You know how it is. You don't hear any jazz for ages and then two gigs come along. This week, I heard jazz divided by a century. On Wednesday, The Hot Sardines brought their vintage jazz set to the grand portals of the NCH. Last night, at Garter Lane , Waterford it was all about newly minted 21st century jazz. They were both remarkable gigs from accomplished jazz collectives.

Kevin Lawlor is a Wexford based drummer who assembled a quartet that comprised, Adam Nolan on sax, Steve Tierney on bass, and Patrick Molitor on keys and lead us through a catalogue of modern work by Bad Plus, Go Go Penguin, Joshua Redman. Lawlor introduced the pieces giving a note on their provenance and a sense of where they fitted in the modern jazz world. The work had elements in common with minimalist composers with improvisations layered over repetitive rhythmic keyboard riffs and frenetic multiple time signatures. Lawlor's own piece, Goodbye Again was one of the more mellow contributions of the set.

The event was remarkable for another factor. To say the audience was meagre would be an understatement. Between audience and ensemble we just about made it to double digits. Where was everybody? I have been at several jazz gigs in this formal theatre space and can vouch that low attendances for jazz is not unusual here. Jazz buffs are perhaps more comfortable in the less formal spaces in closer proximity to the bar. But this event had a sponsor. The evening was supported by the Three Sisters 2020, designed to showcase the best of jazz in the SE and presumably to project the region as a lively cultural hub. You might have expected at least one of the single nomenclatured bid team not to mention the 20+ Cultural Steering Group to have put in an appearance and introduce their invitees.

'Jazz is the only genre that openly accepts a broad spectrum of influences ;' said Lawlor in his concluding remarks. Perhaps more than any other genre, jazz musicians needs that energy and response from their audience to spur them on. I hope this quartet get that from their audience in Wexford tonight and following that in Kilkenny. They deserve it. 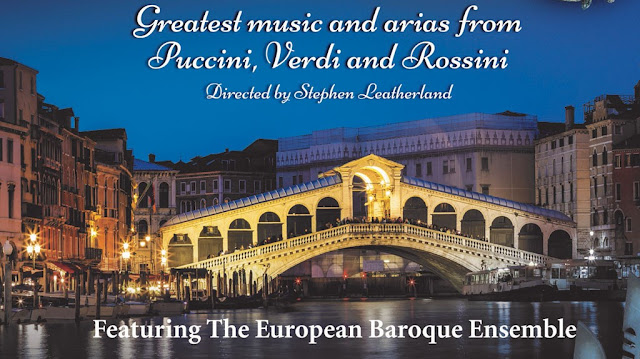 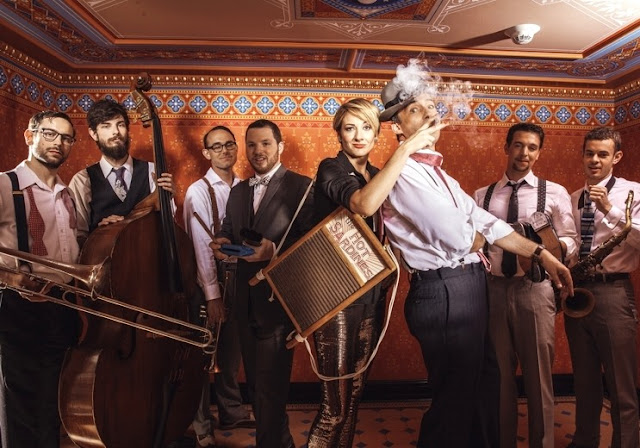 The  Hot Sardines sounded fun when I heard them  on the BBC Radio 3 afternoon show In Tune recently. I was looking forward to hearing them live on their debut in Dublin as part of the Walton's World Music Series. No 'scrappy little jazz band', this 8 pce ensemble were a sharp, sophisticated , sassy outfit How could you not love a band with a tap dancing ukulele player in the line-up. In a flame red trouser suit, Miz Elizabeth acted as MC and lead vocalist (and principal washboard player) and did a good job of making the rather grand space of the NCH a more intimate, laid back salon. The band are on a mission to showcase vintage jazz for a modern audience.  The set list included jazz standards, a show tune or two and more recent musical goodies You can read more about The Hot Sardines here. http://www.newschool.ie/Waltons_World_Masters_presents_the_Hot_Sardines_on_Wednesday_8_June_2016/Default.4486.html

If you were at the gig, you may remember Miz Elizabeth refer to her encounter with Bernie and Orla of the NCH staff and the important matter of scones and what to put on them. You might enjoy this video of that  https://www.facebook.com/hotsardines.

Among the audience were  jazz afficionado and broadcaster, Gay Byrne. (What a shame that RTE currrently has no programme dedicated to jazz on the Lyric FM schedule. Bring back Jazz Alley and Donald Helm)

A great gig. I could only have enjoyed it more were I in a  speakeasy 'eating french fries and sipping champagne'. I'm off to order my new washboard!