The young Paris based quartet  knocked us out in The Large Room with the sound of their sixteen resonating strings combined. They were so young and so good with  such colour and energy in their playing.  Little wonder then that they are winning all round them at international competitions and are playing prestigious venues as recipients of the ECHO Rising Stars. Leslie Boulin Raulet with charm introduced the programme in  clearly enunciated tones and the ladies  as you would expect, looked trés chic . The quartet wore quite the most stylish high heels we have seen in the Large Room for some time. If you missed them tant pis! Have a listen to them in the video below.

Watch out for Liam Murphy's review in the Munster Express soon. 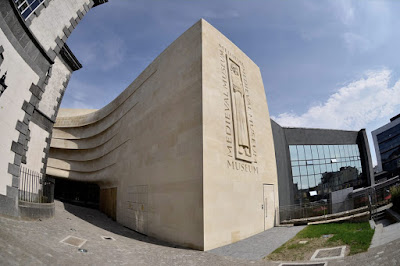 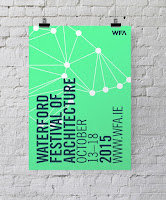 Travelling back to Waterford for holidays over the last two decades, I was struck by the quality of design in some new buildings in the city and the care with which  features in period buildings have been restored.  Nowhere is this more evident than in the confluence of elegance around the Mall/. The brand new Medieval Museum with it's velevety soft-scoop icecream front nestles cosily with John Roberts Georgian Cathedral and Bishop's Palace and the Victorian gem that is the Theatre Royal. I feel very proud that a local firm of architects produced the award winning design for the new Museum. It is fitting that Waterford City is the location for  an annual festival of architecture. The 2015 Waterford Festival of Architecture takes place next week. There are all sorts of walks, talks, exhibitions and related events. Local treasure-historian Julian Walton gives several talks in a variety of locations. There is an opportunity to peer beyond the hall door of buildings not usually open to the public. The lovely new gardens created in a Japanese spirit dedicated to Lafacadio Hearn are included in the itinerary.

Visit on October 15th and you can hear an excellent evening of string quartets from the visiting Quatuor Zaide  in The Large Room, a  gracious assembly hall at  City Hall, a venue as fine as any temple of chamber music in Europe.

More on the Waterford Festival of Architecture on their website- an extract here.

'The festival is over 14 years old and is still going strong, thanks to the endeavours of a very hardworking committee and support from our many sponsors and friends including ID2015 Waterford City & County Council, Fumbally Exchange, Waterford Institute of Technology, and WLR FM.

This year the festival will celebrate the life of Waterford through the built environment and encourage everyone to engage with the city including the metropolitan areas of Dunmore East and Tramore, on a more intimate level, with lectures, events, tours and walks.

The theme of this year’s festival is ‘Origins’ and we will be digging deep into our local archaeology and historic buildings as well as showcasing new and developing projects to help create appreciation and understanding for both how we started and where we are going. 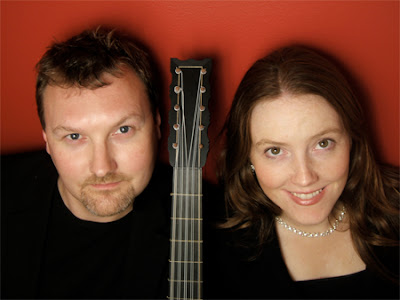 
Tonos are a very fine duo specialising in early music comprising soprano Roisin O Grady and baroque guitarist Eamonn Sweeney. They have just launched a new CD and are on a nationwide tour. I heard  them yesterday at Castalia Hall Co Kilkenny in  a recital of great charm and grace. I commend them to you. 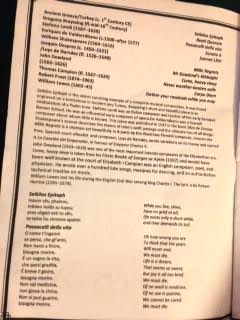 Music and the Dramatic Arc

It has been a busy week.of teaching, playing and  one in which I became enamoured again with theatre after years of indifference. 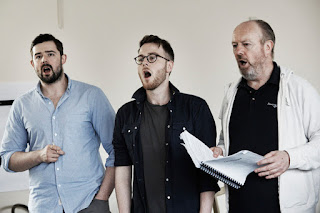 On Wednesday I happened across the press night of a new Abbey production of Sophocles' Oedipus. Given a choice, undiluted
Greek drama would not be high on my must see list but I had heard good things about the composer Tom Lane and there was a irresistable opening night buzz leaking out onto Marlborough Street on a balmy evening on the last day of September. The drama was simply told in a Spartan brightly lit set. Denizens of McCoys Bar familiar to viewers of Fair City peopled the Greek chorus. The demands of Tom Lane's scoring made stiff demands on the vocal abilities of the chorus who rose remarkably well to the challenges. It is years since I was at the Abbey main stage and I was pleasantly surprised at the results of renovations which have transformed the interior  and the acoustic was excellent. Afterwards, the upstairs bar was full of the great and good of the theatrical and political world.  There was some consternation among some theatre
goers at the straying into semi operatic territory but as Tom Lane reminded me, opera was conceived as  an attempt at riviving Greek drama. The sung choruses combining modern and Renaissance elements added interest and help carried the dramatic arc. 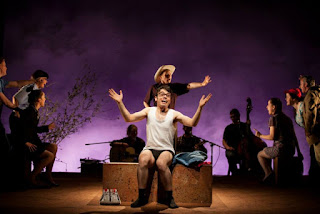 Another production that benefitted from a live musical input was Decadent Theatre Company's touring production of Vernon God Little seen at Garter Lane , Waterford. The Lifebuoys, an excellent trio with employing vocals, guitar, mandolin, beat box and bass were a sort of meolodic glue that made the whole production  stick together. How lovely too to see Little John Nee back on a Waterford stage. Little John was last here with his solo show Sparkplug.

Thebans at the ENO Coliseum http://cathydesmond.blogspot.ie/2014/06/rare-opera-nights-at-coliseum.html

Posted by Cathy Desmond at 7:58 AM 0 comments