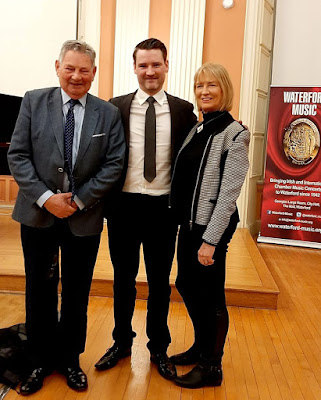 Hansel and Gretel at The Abbey 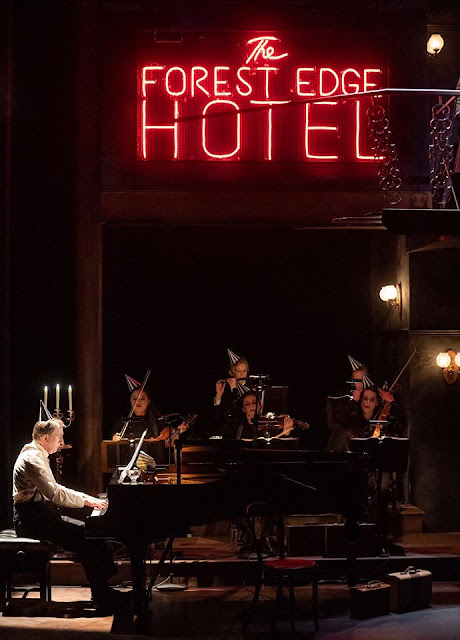 Weather warnings for Storm Chiara were up as  Walsh and Irish rugby fans sheltered in the pubs around Abbey Street, I made my way to the Abbey for the opening of INO's latest production, a collaboration with Theatre Lovett in Engelbert Humperdinck's Hansel and Gretel

Hansel and Gretel at The Abbey Theatre
A film-noirish set, a hardworking ensemble and a lively translation were the strengths of Irish National Opera’s new production of Hansel and Gretel. Directors, Muireann Ahearn and Louis Lovett move the Grimm Brothers’ dark tale from a traditional woodland setting to a surreal hotel occupied with residents dressed in Jamie Vartan’s post-Edwardian period costumes. Musicians make an entrance taking up their positions in the ‘foyer’ salon ensemble in tightly choreographed movement. A spotlight falls on a French Horn player (Liam Duffy) as he appears on a balcony delivering the most exposed of solos in the overture. The roles of Sandman and Dew Fairy are combined in the guise of an cabaret singer a la Dietrich sung by Emma Nash. Raymond Keane’s silent antics as Night Watchman added to the spooky, dreamlike mood.

The singing is good across the ensemble although the dry acoustic in the auditorium seemed to rob voices of some of their warmth. Amy Ní Fhearraigh and Raphaela Mangan play the children who are banished to the Haunted Woods Bar. Miriam Murphy and Ben McAteer’s bring a comic horror physicality to their portrayal as the feckless parents. Carolyn Dobbin has the most fun as the Witch revelling in David Pountneys’ colourful libretto. Richard Pierson directed the six other musicians from the piano in his own reduction of the score. The acoustic here favoured the wind and brass timbres with strings sounding  a bit thin without the oomph of a cello or double bass. The eerie pre-recorded voices of RTE Cór na nÓg worked very well in representing the disembodied voices of the Lost Children.

There was an enthusiastic reception from the first night audience that included a substantial proportion of youngsters.  This is a novel production, on the dark side but unlikely to give anyone nightmares. There are 5 more performances at the Abbey this week followed by a nine-venue nationwide tour. It is puzzling that given the target is a family audience that there are no matinée performances scheduled.
Posted by Cathy Desmond at 1:51 PM 0 comments