A Night at The Opera

I had two wonderful nights at the opera in the last month and all for the price of a cinema ticket. Productions from Barcelona Opera House and Convent Garden were screened at several venues throughout the country recently. SGC Cinemas are to be commended for screening the live production of the Queen of Spades by Tchaikowsky from Gran Teatro del Liceu at Dungarvan . There is a certain frisson from the knowledge that the screening is live and some early problems with transmission of audio track were soon sorted but sadly not before most of the audience had left the auditorium.

The second evening was at the very grand surroundings of Wexford Opera House . This suffered from the absence of subtitles , quite a serious impediment to following the nuances of the plot. The screening was not live which meant two acts could be screened back to back which was a little too much . Thomas Hampson was particularly wonderful as Germot pere and Renee Fleming looked and sounded convincing as La Traviata from Covent Garden
Posted by Cathy Desmond at 10:36 PM 0 comments

Opportunities to hear top notch choral singing in Ennis aren't that frequent despite the town's healthy choral scene. Last Saturday afternoon's programme offered by the La Jolla Chamber Chorus from San Diego will surely rank as one of the musical highlights of this year's musical calendar. The choir, which was over 50 strong, performed for free to the audience that assembled in Glór.

On Tues, I was on the road early to mke the most of a day at the annual Irish Church Music Summer School held in the leafy NUI Maynooth campus. An annual event which usually clashes with the Willie Clancy Summer School, both schools seemed to have been running successfully pretty much along the lines of the original formula for four decades. 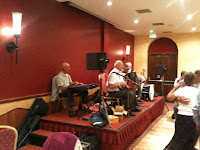 On Monday we called into Dooley's where a lively set dancing session was in full swing. Fear a Ti Martin Forristal, greeted everyone and kept everything moving along nicely, not that this crowd needed any encouragement to take to the floor. One note and they were on their feet. We met Claus Cantwell, my husbands first employer as owner of Cantwell's Music Shop who proved that age is no impediment to piano playing. Martin strikes me as being a wonderful enthusiast and he spoke to me a little about the teaching set up in the Waterford branch. He tells me he has taken up the accordion in his retirement and enjoys having time to practice.
Posted by Cathy Desmond at 9:01 PM 0 comments 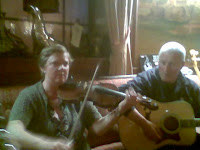 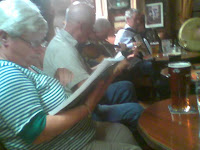 What a consummate professional singer Richie Roberts is . I dropped into Hayes pub in Dunmore where he was entertaining a coach party form Globus Tours in his own inimitable way . Richie combines a great set of songs and gags that seems to strike a chord with his audience. Although the routine is well honed, Richie makes it sound fresh each time

Jane and I joined Matt and Sean and friends in Powers bar on Tuesday night . It is always a pleasure to play with guitarist Gerry Power who relishes a Latin American rhythm . Great Fun ! Jane was a wow playing an extended set on clarinet. Eat your heart out Woody Allen!