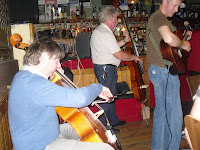 There was a mellow vibe to the set offered by Ger Wolfe and his quartet at the intimate space of Sean Malone's Market Tavern, Miltown Malbay, Co Clare  in Friday night .  Essentially  backed by a string band with the unusual low string combination of cello and double bass ,Wolfe himself on guitar made  occasional forays on fiddle. Richard Lucey on accordion  leavened the string sound .   There were occasional solo dance tunes on accordion and fiddle but just enough to give respite to the voice and it was songs we had come to hear delivered in Wolfe's distictive Leeside  tones.  Paul Frost on bass added solid rhythmic support and Kevin Murphy on cello added sympathetic understated   accompaniment to the songs.  It was a winning combination with the tempos and metres nicely varied.  With a cello in the line up , solo  opportunities might have been exploited more. In this environment it would have been as welcome to hear a slow air as reels and slip jigs and the former would have served just as well to give vocalists a breather.

The Market Tavern  on the mainstreet of Miltown Malbay offers a convivial performing space for visiting acts  and attracts a loyal band of regulars to the historic building  in a village whose name is synonomous with traditional music. The stage backdrop is an impressive  mud  brown cast iron structure which Sean informs me is some form of weighing scales from market days of old  offering  a  pleasing resonance with the past.
Posted by Cathy Desmond at 1:11 AM