They say the devil has the best tunes, but in Poulenc's 20th century opera, Dialogue of the Carmelites, based on real events in the 18th century, the best moments are the nuns' choruses.  The opera is based on  a group of Carmelite sisters martyred during the French Revolution and was the the highlight of a recent  trip to Stockholm  The finale, a Salve Regina is one of the most dramatic of any in the operatic repertoire and the director, Joanne Garpe  takes the approach here of having the cast members fall in their spots to a muffled drum stroke with the guillotine obliquely referred to.  (Sister Act it ain't, but it was hard to suppress the image of Whoopi Goldberg in a a similarly named number and a not dissimilar costume ) In contrast to other productions , the watching mob are in modern dress with the nuns' costumes transforming briefly  to burkas presumably a  director's reference to  accusations of xenophobia of Sweden's New Democracy Party*

As the subtitles are of course in Swedish and my French is not good enough to follow the sung recitative, the first act felt quite long . I am delighted however to have a seat in the side balcony which gives a great view of the action in the pit. The orchestration is beautiful and the playing from the Kungliga Operan  Orchestra is very fine and there are beautiful colours particularly from the woodwind as one would expect from a 20th century French composer.

Like several of the operas I have seen recently, the sets are monochrome with muted shades in  the costume. Here the black white and grey  is replaced by an IKEA catalogue style blue and stripped pine silver. I love the mildewed convent wall from which you can almost smell the damp.  There is the obligatory McVicker's style splash of red however and in a neat stage effect  vertical lines of vermilion stream down the corrugated backdrop powerfully evoking the bloodshed of the guillotine in the final scene.

There are large cloakrooms on each floor and the audience are comfortably rather glamorously attired  and the lighting in these areas is restfully dimmed. My seat at 290 Swedish Kroner (€30) was perhaps the best value I have had in opera tickets in quite a while. The opera house with  comfy red velvet   seats and period decor is elegant space with an intimate feel to it  without being overly ostentatious.

Earlier in the day I attended  the lunchtime concert at the Gustaf III Cafe in the basement.  Not a great venue for poor old Gustaf as he met his end I believe in this very house, the event  immortalisted by Verdi in operatic terms in Un Ballo in Maschera  Not having a ticket I came along early to find no door open to any part of the house. With the Box Office closed, I walked around the house (twice)  looking for a separate entrance to the cafe.  Feeling like Alice in the Looking Glass I found entrances that looked like promising but were not the Gustaf 111 which in fact is accessed through the main door  and which didn't open til the appointed hour of noon.

I assumed that we would have light frothy lunchtime arias. Had I read the small print I would have known to expect a Shostakovich piano trio which is a bit like being served pickled herring when one was in  the mood for lemon meringue pie  The playing I have to say was excellent but I couldn't help eyeing-up my table companions's cream  bun which I had overlooked at the self service counter.

I enjoyed chatting to door lady Lena about her time in Dublin learning  English and her enthusiasm for the operas of Gerald Barry, himself a Clare man. She hoped to get to the Wexford festival some day and pointed out a name among the production credits.  No mistaking the Irish influence with  a name like  Conor Murphy  listed as lighting for the production of Lohengrin.

All in all, I enjoyed a | very interesting, entertaining and inexpensive night at one of Europe's oldest opera houses.

*(The Sweden Democrats grabbed the headlines at last year's ecumenical service when they stormed out when bishop Eva Brunne argued that xenophobia and racism "is not worthy of a democracy like ours".)

Email ThisBlogThis!Share to TwitterShare to FacebookShare to Pinterest
Links to this post
Labels: Dialoque of the carmelites, Karmelitsystrarna, Review, royal stockholm opera 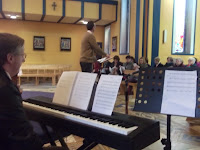 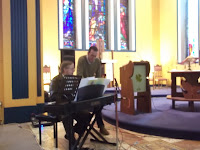