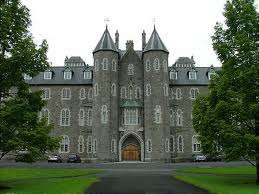 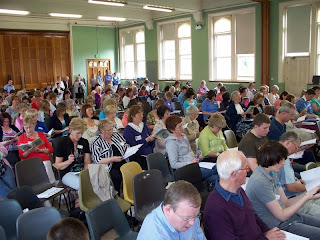 
While trad  musicians made their annual pilgrimage  to Clare for Willie Clancy Week. I travelled East  to the gathering of  Irish Church Music Association Summer School in Maynooth held in July and attended afternoon and evening events on Wednesday and Thursday. There was a good buzz with numbers appearing to be up on last year.  I enjoyed the programme of liturgical music accompanying Wednesday's service. The rousing Joncas gathering hymn with a Latin refrain  would suit most choirs and the upbeat syncopated closing number should fit well into schools' and gospel choir repertoire.  While I liked Bernard Sexton's  Mass settings, in general  I found the psalms on both days not quite stringent enough. I believe  'ooh... '  has no place in the lexicon of a psalm setting and  my toes curl in sympathy with the embouchure if I have to sing such a lyric in a liturgical context. In Thursday's liturgy, Chris de Silva's setting of psalm 19, Words of Everlasting Life  while very melodious also included the dreaded syllable with florid  piano interlude  and the number was a bit 'Tin Pan Alley' for my taste. This is definitely one for choir only with echoing of phrases between vocal parts.  Christoper Walker's short hymn 'Draw Near in Faith' was very tranquil lovely  four part setting  of a Communion text. There was an organic feel to the proceedings with the inclusion of Lord Jesus Give Us the Bread of Life featuring an attractive anthem like  refrain by participant John Jones from 2010 Composition seminars.   The special choir contributed some beautiful numbers under director Orla Barry. Splendid organ voluntaries by David Connolly and Eoin Tierney rounded off the proceedings. 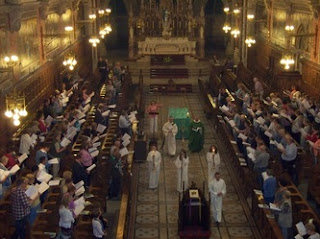 There was much focus on change in the missal and the adaption of  musical settings in accordance. As I was not present at any of dedicated familiarisation sessions,  I can't comment on the formal pronouncements Informally  there was some concern expressed at a further divergence from the Anglican wording which  seems to counteract any ecumenical movement to common  settings of liturgies . There was a sense that while modest in the scale of changes in our lifetime, there was little enthusiasm for them  and  it is not as if there are not more pressing matters in ecclesiastical matters generally. However church musicians are a stoic band and applied themselves to absorbing the changes and making adjustments over the week. One fortunate consequence  is the publication of  a compilation of popular Mass settings 'Sing the Mass' including revisions and this should be a very useful resource particularly as some of the Mass settings have been out of print.


Cantando under director Orla Barry gave a concert in the St Patrick's Church .  This is a very long space and problematic  for a performance  particularly of chamber groups. I felt they would have had more impact  positioning themselves in the centre in the pews as they seemed very far away from their audience.

Fiona Walsh of Ennis Gospel Choir had an interesting proposition regarding pop up liturgical choir. It was good to meet familiar faces and also to make new contacts. I enjoyed talking to  Betty Fitzgerald from Cork about her school projects  and Aine Mohoric about her music therapy work in Crumlin. Fr. Brian Power from Waterford had some interesting observations about congregational singing in rural Deise parishes.   I joined Olive O Brien,  Caitlin Ni Mhaoldomhnaigh from Tulla and  Limerick liturgist Joe O Connor for dinner in the magnificent Pugin refectory. I made some enquiries among delegates about progress in initiating vespers in their churches, a practice promoted at 2009 summer school  particularly for cathedral parishes but it would appear not to have become established practice in Irish Catholic churches. While the gathering continues to be useful for familiarising liturgical musicians with lots of repertoire, I believe there is scope to include more in the way of  discusssion and advice on the practical side of running choirs like

*PR ;  using local media to promote choir endeavours;
*atttracting a gender balance in new recruits (usually means more tenors and basses ),
*maybe some consideration of  aspects of philosophy in relation to sacred music ,
*Encouraging the congregation to participate . Is it  important?  Some congregations seem to participate more than others . What constitutes good practice in this regard?

You can read my report from the 2010 Summer School on    this link.
Chairman Paul Kenny presided over the proceedings  and kept things moving along in genial fashion .  I stayed in St Patrick's College building itself which where my comfortable  room looked out on the carefully tended quadrangle greens and was good value for a tranquil and  historic location.

Posted by Cathy Desmond at 4:07 PM