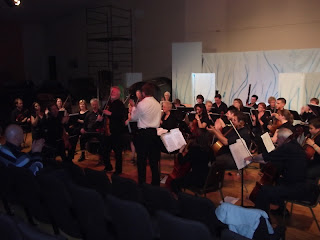 The staff and senior students of Summer Music in Galway, the  long established summer music school gave a terrific concert at Danlann, Ennis Co Clare on Monday night.  The main work offered was Beethoven's Violin Concerto with David Stewart as soloist. The concert master of Bergen Philharmonic Orchestra appeared to really relish the performance and was well served by the orchestra under Paul Ezergalis.  I was struck by the prominent role of principal bassoon and Michael Dooley did justice to the numerous duet moments in the work. Michael was also credited with a chaming arrangement of an Irving Berlin medley.  The strings were a liitle over emphatic  for my taste and might have aimed for a more relaxed feel for this 1930's popular repertoire. There was a selection of operatic arias by Mozart and Rossini  from a quartet of singers,  including Sarah Ellen Murphy and  Helen Houlihan, the context set  in amusing introductions by  soprano, Edel O'Brien.  There was rare treat in an arrangement of a piece called Cousins featuring a rich and warm duet combination of cornet and trombone.

Regrettably for such a high calibre of musical treats,  the audience number was roughly the same as the number in the orchestra. I think it is very difficult to gather an audience for a one off event unless it is hooked to another group or is publicised as part of an overall festival or sequence of events. I think there is some scope for a number of groups to pool their advertising resources and market Ennis as a multi faceted music hub and promote  their events in a combined effort . Come for Willie Clancy Week  and stay on for Summer Music.  Leaving that aside with two music schools and numerous choral groups in Ennis, it should be possible without too much advertising, to bring in larger audiences than are usual at classical events in Ennis. Musicians themselves I believe have a certain responsibility not only to perfrom but also to form an audience for fellow performers and to encourage our students in this regard. Although I still comb the local papers for news of events, I tend to look now online for information which I would not have done a year ago.   In fact, it was a text message that brought me along on this particular evening as I had missed seeing the printed advertising .

The next event in this venue will be  a  youth opera , Deep Waters  8pm Thursday 11th August .
Posted by Cathy Desmond at 9:32 AM