Opera in the Open 2011 - Lunchtime Arias at Wood Quay 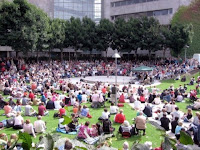 A trip to the open air opera productions in the Italian city of Verona is the sine qua non of  al fresco experiences for many opera buffs.  A rather more accessible amphitheatre experience for Irish punters was available free of charge in the garden of the Dublin Civic Offices every Thurday during August  weather permitting.  I was surprised to learn that this series has been running for 12 years and I was delighted to catch the last production of the season last Thursday.

There were many anxious eyes watching the weather that day in Dublin with thousands heading to Clontarf for a  rematch  between the Ireland and England cricket teams. While rain interrupted procedings in Castle Avenue, thankfully, there was no break in play in Wood Quay and the sun even made a cameo appearance during the second act.

﻿﻿
﻿﻿﻿ ﻿﻿﻿ ﻿﻿ In this light hearted production, Beaumarchais' infamous plot for The Marriage of Figaro is moved from the 18th century to a  1960's hippie commune and features a sextet of singers and a keyboard player (David Wray) with the action condensed into a frenetic hour long escapade.  The opera is shorn of  much of the recitative, replaced by regular humorous plot updates from narrator  (and director) Morgan Crowley , who  extracted maximum comic potential from this device. (It reminded me of the approach of Roberto Recchia in La Serva Padrona  at Wexford last year). The singers were very effectively amplified with head mikes but the quality of the voices was not obscured and the standard of singing was excellent from all. Of the cast  I recognised  Sandra Oman as Suzannah and Simon Morgan as the count from appearances in the Shannon region last year.
A spontaneous standing ovation followed the final sextet. Among the many afficionados we met Jack Morrissey who was promoting his forthcoming Flanders and Swan revue, Anne and Aidan White who regularly travel form |Shannon for the series, Juliet |O Sullivan who had travelled from Cork and Bernadette Comerford of RTE .

The audience numbering about a thousand were of all ages and ranges and there were several large groups . There were more buggies and wheelchair bound patrons than in a typical opera going audience given the accessibility of the occasion from a cost and logistics point of view. I love open air events  and with our summer being so brief, I hesitate before committing to an indoor experience resenting wasting any precious hours of sunshine before  Winter sets in .  This was great fun and the singing was of a very high standard. Much has been written about the sorry state of opera matters in Ireland and while I appreciate the concern about the abscence of a formal venue in the capital, I would not have swapped this fun afternoon for some of the evenings I have been fortunate to spend in some very fine houses. I am guessing it was just as much fun as Verona without all those Roman steps to climb. It was like - 'so cool man!' 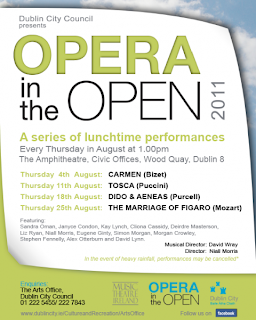