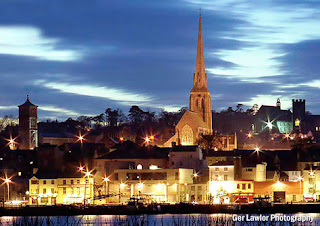 How very sweet indeed it is to sit in the lobby of Whites Hotel during the annual Wexford Opera Festival, the walls adorned with colourful paintings and observe the artists, performers  patrons and opera anoraks  milling about, nibbling canapés which are complimentary with glasses of champagne and sparkling wine, all very civilised.


Wexford with its attractive seaside port position looks very pleasant in the autumn sunshine. The first sounds we hear are that of the Kavanagh Ensemble from a side street gallery playing a light repertoire of Joplin rags, wedding numbers and some arrangements of pop songs.

We press on to the Opera House where he goes off the idea of attending the evening show when only the dear seats are left  (just as well as he has lost his dress suit) and we content ourselves with the afternoon short opera, Winners by Richard Wargo . We dawdle in the shops and art exhibitions, the customary themed window displays adding some colour to the High Street. Oxfam has a great selection of vinyl opera records and we indulge in a little retail therapy. It is so much more satisfying to root through a box of records than insubstantial CDs. Onto Whites where we plonk ourselves in the lobby to sip champagne, eavesdrop , admire the lovely paintings and await curtain up.  Ivor Coburn's gigantic botanic watercolours contrast with Therese McAllister's luscious fruit displays and the bold seascapes of Ciaran Lynch.

In Winners, a setting of a  doom laden one act play by Brian Friel, two 'ballad singers' narrate the fate of illfated young lovers. The soundscape apart form the evocative uileann pipe soundtrack at the beginning is reminiscent of Sondheim and the English libretto was clear and easy to follow. All the singers looked so youthful they could have come from the local secondary school with the exception of American baritone, Adam Cannedy who had a more mature manly looking stage presence. There was a very nice solo aria by tenor Robert Anthony Gardiner. I found it hard to warm to Kristy Swift's petulant teenage character and the more sombre tones of mezzo soprano, Jennifer Berkebile's ballad singer were soothing in comparison. Wargo is apparently currently working another cheerful tale by an Irish author, Sharon's Grave by John B Keane.

The next day I returned to the scene to see  Pergolesi's La Serva Padrona. This is a familiar title to me and I had forgotton why it should be so. The helpful programme note explained that the title has 'earned its place in music history, having triggered the famous Querelle des Bouffons in 1752 beyween the defenders of the French style of comic opera and supporters of the livelier Italian style' The maximum comic potential was wrung out of this piece by director and star of the show, Roberto Recchia who had the audience splitting their sides with his pre show plot synopsis, puns and 'front of house' announcements at the expense of the somewhat disconcerted  front of house man, Michael O Reilly. Roberto Recchia also provided the quirky programme note. No chance of Michael Dervan spotting a crib here. The scene was given an up to date setting with actors dressed in White's house uniforms.

The house was packed, with standing room only and the two singers, Russsian soprano Ekaterina Bakanová and American baritone, Bradley Smoak gave fine performances fully exploiting the comic nuances with an excellent pianist Greg Ritchie adept at genre switching which worked a treat.

The fringe festival is what brings me to Wexford annually and there is plenty to amuse and entertain .  One of the most innovative opera projects I have seen in recent years was Flashmob the Opera screened on BBC some years ago  I feel the ground floor of White's Hotel  just might work to stage a Flashmob Opera style event    Plenty of spaces and levels  visible and room for a sizeable number of people to gather.

Great to see the short operas reinstated but one caveat. Please can we have the surtitles back. I know the plot isn't complicated but I miss them. I want to be able to know when to titter along with the rest of the audience . It must be possible in a modern state of the art hotel conference centre.
Must go now, Justin has just brought me some more canapés
Posted by Cathy Desmond at 12:46 PM