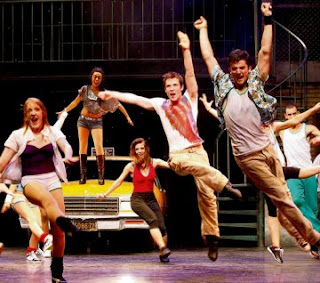 Alice and I enjoyed Fame the musical at UCH Limericktonight . Tickets were good value at €20 .  A list of about four names were read out at the beginning so I am not quite sure who was playing who tonight.  Certainly all the characters seemed well cast, and convincing.
The characters playing Romeo and Julliet were very charming and gave nicely understated performances.  The strength  of the production was in the energetic ensemble
dance routines.  I loved the flamenco routine in the second act.  The on stage characters /instrumentalists sax, flute and drums were impressive but how very frustrating not to be able to see the band, even obliquely.   I had to content myself with turning around occasionally  to see the MD  (who I assume was David Hayes) on the monitor at the rear of the theatre. The band sounded great ,  a good range of colour, nice brass timbre and not overamplified.  The  voices in the chorus numbers however were very shrill and in the sections where you had  several voices in conversation, I could not tune in to the individual voices. In the second half, I sat further back and the sound I thought was better.   The  house was reasonable with full front stalls and director  Brian  Flynn and his large   cast deserved their standing ovation.
Posted by Cathy Desmond at 1:29 AM