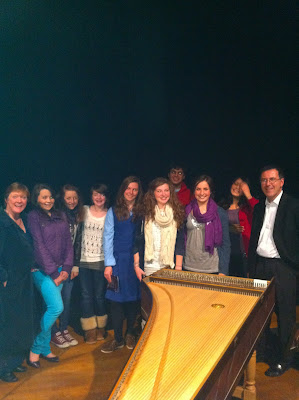 One of the outstanding events of the musical calendar in Ennis in the year to date was the visit by the Irish Chamber Orchestra to Glor in Ennis on Thursday 30th September. The orchestra performs regularly at their base in UCH Limerick but a performance in Ennis is a rare treat. The ensemble consisted of 18 string players and directed this evening by violinist Catherine Hunka.


At the Dublin debut in 1965 problems with tuning the Trinity harpsichord deprived the Dublin audience of the continuo accompaniment. Thankfully there were no such problems tonight and David Adams skills were a vital part of the programme of Vivaldi perennial favourites , the Four Seasons. Also on the programme were short works by Elaine Agnew, Puccini and Wolf. Of these the Puccini work titled Chrysanthemums made the greatest impression on this listener, a lovely lush romantic piece exploiting fully the sonority of the ensemble and the piece I most want to seek out and hear again on disc.

The main body of the programme, the four violin concertos by Vivaldi, gained much from the simple device of having lines from the poems written by the composer himself, spoken by various members of the ensemble as a introduction to the each concerto. The Four Seasons were offered with the shorter pieces interspersed as a sort of musical sorbet. The concertos were delivered with great verve which gave a freshness to this popular repertoire, melodies from which are the bread and butter of every wedding ensemble and school orchestra. Particularly lovely was the sinewy almost flirtatious duet work for solo cello and first violin, a feature I had not apreciated from hearing the works on disc. There was a certain frisson among the audience at one point caused not by the beautiful pianissimo of the orchestra but the appearance of a large spider but director Catherine Hunka literally didn't miss a beat while the offending arachnid was dispatched by one of her colleagues.

It was joy to be at this concert which had an excellent house and hear the orchestra play with their customary verve and polish . Charles Acton in his review of the first Dublin appearance of the orchestra in 1965 wrote of the 'enormous vitalty and excitement of the ICO and their ability to communicate the core soul of the music and pondered if it could be retained . I think that we can safely say that almost five decades later they've still got 'it'. Let us hope they include Ennis on their itinerary again soon.

A particular thank you to harpsichord player David Adams who allowed the ladies of Colaiste Muire Orchestra to try out this rare instrument following the performance. A memorable night of top class entertainment at Glór. Bravo!.
Posted by Cathy Desmond at 12:06 PM