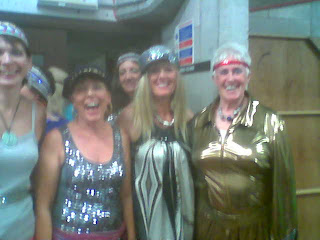 Great fun was had by all at the International Open Entertainment Competition run by the Irish Association of Barbershop Singers at UL over the weekend.

Teenagers in school uniforms rubbed shoulders with tall handsome Swedes in gangster pinstripes, middle aged ladies in Abbaesque glam rock chic and an army in an array of rugby jerseys. Not a sign of a long black skirt or a plain white blouse anywhere.

Clare contributed most in the way of young talent to the event with two groups under the direction of Michael Hennessy appearing. The Colaiste Muire girls from Ennis threw themselves into the spirit of the endeavour in an attractive pairing of numbers, Mr Sandman and It Ain't What You Do ' the latter performed by a smaller group with body percussion provided by the whole choir. Hot on their heels onto the platform were Chill, a young male quartet who are rapidly making a name for themselves and much in demand following their Electric Picnic debut.

My personal favourite was 4in a Bar.com (geddit) not only for their vocal ability but the razor sharp wit of their Limerick version of the Teddy Bear's Picnic
The winners were The Entertainmen, a 30 strong chorus from Sweden whose crowd pleasing ,hand clapping, foot stomping number scored a hit with an audience eager to participate. Rather strangely they offered just one number where everyone else did two. A total of 400 competitors in 25 choruses and quartets from 8 different countries featured over the 2 day convention.
The judging panel seated at the front held up their scores in a show biz style reminiscent of Strictly Come Dancing to the accompaniment of raucous cheering and booing from the audience.

The MC, a gentlemen properly attired in barbershop dress of tux and waistcoat hit just the right note of formality and frivolity to contribute to the good humour of the occasion. The 'Glee' effect was palpable everywhere and no bad thing either, and served to inject some pzazz into occasion. Nobody stayed in the foyer too long for fear of missing the next act and the auditorium was pleasantly full. Irish Association of Concert Bands take note ! (see blog entry May ) All in all it was great fun and a wonderful experience for the girls of Colaiste Muire Choir. Bravo girls.
Posted by Cathy Desmond at 2:04 AM