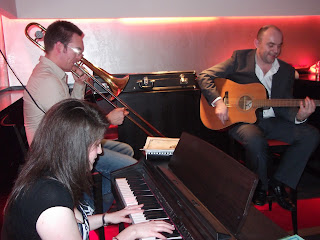 I attended the annual post music teachers' conference, hosted by the PPMTA  this weekend at the Sheraton Hotel in Athlone. It was a packed programme of lectures and workshops, jam session, networking oppotunities and with the hotel conveniently juxtapositioned beside the shops, opportunity for a little retail therapy without missing too much of the conference action. 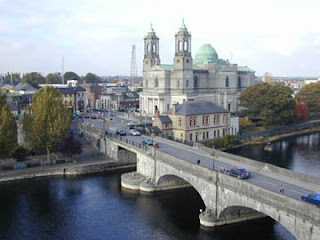 Transition Year topics featured two excellent workshops, the first by Steve Mc Farlane with loads of practical advice on how to implement radio programme projects. Joe Rogers spoke about his freelance TY programmes again with lots of useful practical detail. I would have thought the weekend was worth it just for his wee G chord although I got some very funny looks from bystanders when demonstrating said chord for the Songschool team later. No more transposing from G to A for me . Anne Marie Higgin's ICT presentation featured a plethora of eye popping high tech visual whizardry but it was good to see Jonathan Browners low tech but very effective polystyrene cubes too.
Ernestine Healy's powerpoint presentation on regional styles was full of detail but perhaps was a little more information than most teachers required and the questions came down to rather more mundane level such as how to avoid confusion between slow reels and fast hornpipes, than any discussion of the finer details of iconic players'styles. Mary McFaddens talk emphasised again the value of working in some kinesthetic element into music classes.

Following dinner where I met teachers from Waterford and Dundalk including Niall Crowley, stalwart of choral scene in the South East  and Margaret McCann music teacher at De La Salle .   There was a lively jam session in mellow jazz mode featuring the fine guitar skills of Vice Chairman and recording artist Steve McFarlane. Donegal featured very strongly with a bevy of beauties who looked like they might be sitting their Leaving Cert doing barbershop turns . A local resident gave us a few Bagatelle numbers. Duncan, IT expert proved to be that rare breed, an improvising trombonist


There was a good trade display. Luthier Mark Keeenan had some splendid instruments including a very fine viola. Mark tells me he has dedicated his new studio to his great grandfather Edward Keenan who was also a luthier of considerable repute in Ireland during the last century. Songschool team member Mark O Dowd could also claim a musical lineage and tells me his mother was Christine Patterson of the eponymous trio who enjoyed great success in the 70s and familiar to many from their appearances on the Morecambe and Wise show.
The thorny question of offering private tuition during school hours was raised at the open forum. I expressed my reservations but the mood seemed generally in favour of the practice. The Sheraton was comfortable and convenient. The food was good and leisure facilities nice. The actual lecture rooms were a bit tight and it a little awkwardly positioned on the second floor and and like all hotel venues, you forget how hot they are going to be.
Well done to outgoing chairman, Ethel Glancy, this was an enjoyable and well organised conference

Email ThisBlogThis!Share to TwitterShare to FacebookShare to Pinterest
Labels: Conference