Waterford 1100 Talks: From Ballybricken to Belgravia 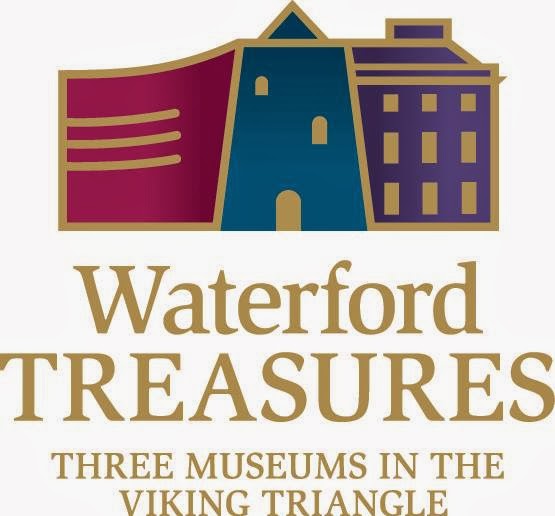 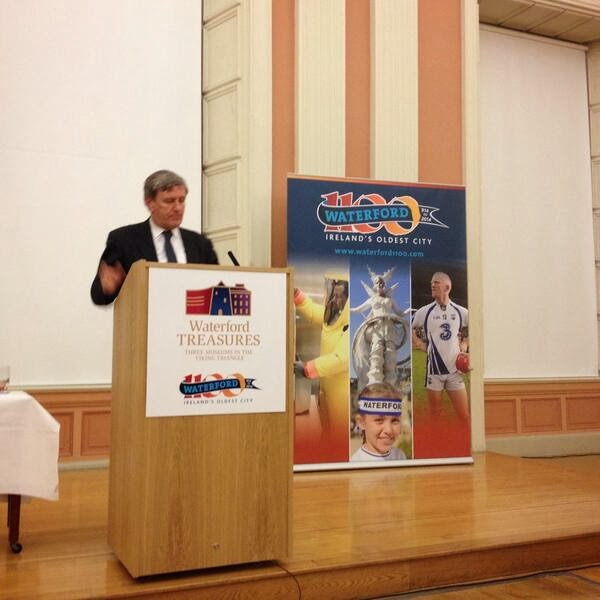 As part of the Waterford 1100 celebrations, Waterford Treasures has initiated a series of talks from high profile speakers on  life in Waterford over the last millenium. Tonight following a civic reception, Irish Ambassador in London, Dan Mulhall gave a insightful and eloquent address to a full house at City Hall.  He was introduced by Curator Eamonn McEneaney who gave a local historical perspective referring to illustrious ambassadors over the centuries. William Wyse, he informed us  represented Waterford affairs in the court of Henry VIII and Luke Wadding had an interesting diplomatic career, we learned, representing Spain at the Vatican. He acknowledged the sponsors of the series, Liam and Ann Cusack of the Granville Hotel who were in the audience for the occasion.

Opening with a cupla focail as Gaeilge, Mulhall began by sketching in some details from his biography from a conventional Irish childhood growing up on the Yellow Road, schooldays at Mount Sion CBS, summers of playing football and working in Clover Meats and the Jute Factory, an Arts degree at UCC before securing a place as 3rd secretary at Foreign Affairs.

He went on to talk about his various postings in several continents. He spoke about specific changes and   how much the world and process of diplomacy has changed. He recalled for us living in an era of instant global communication,  the time when the only reports from home arrived in a diplomatic bag and 'cut and paste' was meant literally. He set a broader context  of representing Irish interests abroad referring to the changes in global  economic canvas, the reduction in scale of violence in Northern Ireland, the reality of the Cold War politics and the importance of the German economy and its language in Europe. The diplomat advocated the value of social media and in particular Twitter as a tool in the communication strategy of a modern day ambassador. He spoke also about his pride and pleasure in seeing the improvements in his native city on his frequent trips home to his native city.

There was a lengthy Q&A  during which the diplomat fielded all manner of queries from international politics and how to get on the diplomatic ladder but declined to be drawn on expressing any less than  charitable opinions on any of the politicians with whom he had engaged. Quite a gala occasion, and  the evening closed with refreshments served in the Waterford  Medieval Museum, one of the architectural gems in the Viking Triangle.

Tall Tales from the Crypt : There was a resonance with the speaker at the first of the Waterford 1100 talks. Both Mulhall and Pat Wallace, retired director of the National Museum credited the serendipity of securing their first job to pals who waved a newspaper advert at them and cajoled  them into applying. Wallace, now retired entertained us with yarns and anecdotes from his decades of
working for the National Museum and as site director of Wood Quay.  It was quite a  different style of address,  free from the circumspection required of a working diplomats but it was highly entertaining.  It was touching that of all the wonderful artefacts he has come across, it was the written word that moved him most. The sight of his grandmother's handwriting and the 18th century livery notebooks of a Limerick stable offering coach transport  ( The Michael O Leary of his day as Wallace put it) thrilled him as much as the most glittering trophy artifact in the museum cabinets. How about that! Spare a thought for the historians of the future as they root through corrupted discs and memory sticks. There is something to be said for tablets of the stone variety.

Lunchtime History Bites: 15 minutes of history on the some aspect of the museum every Weds 1.15pm

Climbing the Walls at Spraoi

Irish Classical Artists Shine on London Scene
Posted by Cathy Desmond at 12:57 AM