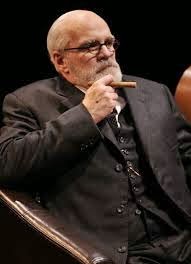 The Alley Theatre nestles against the skyscrapers of Downtown Houston. It's a little oasis from the world of oil barons as they discuss the latest rise and fall in the price of the liquid commodity.

There's a real community once you enter the door and it has a feel of passionate volunteers protecting the art form of live theatre. There was extraordinary courtesy from first greeting to the gentleman who shepherded my group of standby ticket holders to the last of the seats on a busy Saturday night.


Before the performance a gentleman advised the audience of the Alley's plans for a major refurbishment costing $73million (read it and weep Irish theatres!). The refurbishment is aimed at maintaining the theatre's position as 'the foremost regional theatre in the country'.


The play I was was just in time to see was 'Freud's Last Case' written by Mark St Germain and directed by Tyler Marchant and is a two-hander. The piece was new to me and was first premiered in 2009 . It has played to a run of over 700 performances in New York City.

The plot concerns an imagined meeting in 1938 between the psychoanalyst and CS. Lewis the author. Britain is on the brink of war and the radio broadcasts of chamberlain pepper the stage action.

The work is staged in the round in a stupendous set (Brian Prather) - a drawing room compete with a range of miniature religious artworks that Freud has collected. The action is compact at an hour and a half or so and concerns dialogue between the two characters about religion, politics and life in the prevailing climate. Freud as an atheist is in contrast to the believer Lewis and they debate their positions. The Freud character is giving the best lines and cracks a few fine jokes full of wordplay. What's clear is that Freud is close to death and suffering from a dreadful illness that is realistically and vicerally played by James Black. Jay Sullivan played  the enthusiastic professor excellently as he brought the enthusiasm of youth against the elderly and wiser counterpart. A great night and the Alley is on my list of things to revisit in Houston, if only to see how they spend that $73 million.

Posted by Cathy Desmond at 8:45 PM