My review of this concert appears in The Irish Examiner on Wednesday 25th February. A fuller account of the evening is presented here. 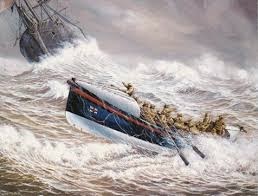 Wexford Sinfonia: Heroes of the Helen Blake
composed and conducted by Liam Bates

On brave white horses that rise and charge,
Aloft the heaving breast of the way-ward deep,
T'ward weary ships and solemn hearts:
Make fast my bond, make fast my pledge to keep.....

Beat  hard the waves that drape my sense.
God's light, my compass ever be.
Liam Bates

It was a compelling  evening, brimming with emotion  as Wexford Sinfonia  premiered a new composition by Liam Bates to a capacity house at County Hall.  Among the elements,  there was the sombre sense of time and place. The event marked the centenary of the sinking of Norwegian vessel, The Mexico off the Wexford coast and the loss of nine lives among the local lifeboat crew who went to aid the stricken vessel. As a prelude we heard  author, Eoin Colfer reading from his late father's account of the epic tragedy.

The work for large  symphony orchestra in five movements was full of colour and drama written in a rich, post Romantic,  film score style.  The parallels with Vaughan Williams are apparent in the use of sea shanties throughout the movements.  The chorale like hymn tune, Hail Queen of Heaven, the Ocean Star features as the  main theme of the first movement and is echoed in later movements. The second movement is calmer opening with the clear textures of a solo clarinet line  set against scurrying string motifs and  delicate harp accompaniment. The most distinctive aspect of the orchestration was the unusual battery of percussion instruments assembled that create the dark menacing mood of  the third movement. In addition to the standard kit of assorted drums and tubular bells, we heard the clang of a  ships  propeller, old metal plates and a ship's bell rang out several times through the work.  Bass drum rolls and a poignant horn solo evoke the 'Vale of Tears' in the 4th movement.  There were resonances with Scandinavian composers in the low growling bass lines set against high tremolo strings.  In the final movement.  a male voice choir rose to sing a simple unison setting of the composer's own poem on  the theme before violins took over with a lyrical passage before the sound dissipated with an eerie single high tremolo note on upper strings.
By any standards, this is exciting and well crafted symphonic writing, teeming with ideas that deserves further airing on a national platform. Though  strong enough to stand on its' own merit, it would make great material for projected animation  project.

The players of the Wexford Sinfonia were fully up to the demands of the collage like score. There was much to enjoy also in their account of the opening pair of Grieg's  Peer Gynt Suites echoing the Norwegian theme . Brass and wind fared better in the acoustic of the T shaped space. All the solo lines could be clearly heard but the the full string sections lacked the strength of volume you might expect from the ample numbers

At the close, audience rose to their feet in sustained and heartfelt applause and  took some time to disperse as players and listeners mingled to savour the event. Bearers of inherited medals for bravery issued by the King of Norway and uniquely by the GAA  proudly  posed for photos with composer, Liam Bates.

It was appropriate that we stepped into wind and rain as we left the building, a reminder of the elements faced by those people in every coastal town who bravely  go to the aid of those in distress at sea. This was a fitting paean of praise to them.

Here's some voices from the event. Click in 'Read More' for more voices and Venue Notes

listen to ‘Leader of  Wexford Sinfonia, Teresa Doyle ’ on Audioboo


Venue Notes: I had some trouble finding the venue, a brand new glass and concrete rectangular structure  which is quite a distance out of town. (Whatever was the local council thinking?) With a long corridor like foyer space, there was inevitably  poor visibility for most of the 500 hundred or so attendees.  Wexford town seemed very quiet as I drove through on Saturday night. I gather the magnificent Opera House built at enormous public expense was dark that evening One would have thought that  the venue might have been made available at marginal cost for such an occasion.

Posted by Cathy Desmond at 3:06 PM