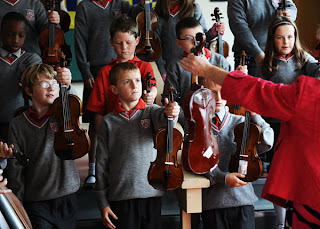 FOURTH-class pupils at Ennis National School are getting the opportunity to learn the violin during their school day, through a pilot music project starting in the school later this month.
Well-known music teacher, Cathy Desmond, a former member of the Irish Youth Orchestra, will be teaching up to 90 students from the three fourth classes in Ennis National School in the programme, which the school has aptly named Swinging Strings.

The director of Ennis National School Band Fiona de Buitléir explained how the project came about.
“A number of teachers in the school saw the Music Changes Lives series on RTÉ last year, which featured various schools and how the introduction of music classes impacted on some of the pupils. The series showed how the children were provided with instruments and tuition once a week. The series was wonderful and some of us began considering the possibility of running some sort of similar programme here at Ennis National School. We were very lucky because Cathy Desmond approached us about teaching music at the school and the whole idea stemmed from that. Cathy is so enthusiastic about music and was very supportive of the idea. We are delighted that she will be working with the school to provide this programme,” Fiona added.
Cathy has over 20 years experience as a music teacher and has received an award from the Irish Association of Youth Orchestras for her work in establishing a Violin for All group at St Peter’s College in Dunboyne, County Meath.
She visited Ennis National School on Wednesday morning to give some of her fourth-class pupils a brief introduction to the violin and to the programme.
“Very few in the group had any experience or much knowledge of a violin before, so they were intrigued when she showed them the violins. She has bought a class set of violins, as well as a half-size cello and half-size double bass, which will be shared among the three classes, who she will be teaching. The idea is that all of the pupils in fourth class will learn the violin, while a smaller number will get the chance to learn some basic skills on the double bass and cello. Most of the children hadn’t handled a violin before and they were very excited when they got the chance to hold one this week. It is all quite new to them, but they are excited. A small number are going to private music classes, outside school, but most have only learned basic playing of the tin whistle and recorder here in the school. This is a wonderful opportunity for the children and we are very lucky to be offering this programme this year,” Fiona commented.
She stressed that Ennis National School is a strong music school, which offers good opportunities to pupils to engage in musical activities. “We have a large choir with up to 150 children in it, including children from third to sixth classes, which is directed by Marian Pilkington. The choir performs quite regularly and is honestly a good choir. We also have the school band, which I direct. There are up to 80 children in the band, also from third class upwards, and we have a percussion, string and wind section. I think we have made good progress with the band and I’m looking forward to the year ahead with it also,” she said.
She also hopes that some of the pupils who will be learning the violin with Cathy will play with the school band at some events, including Christmas events.
“We would also like to see this programme expand to other years within the school in the future. We will see how it goes in this, its first year but if everything goes smoothly, I can’t see any reason why it won’t expand. There is great support for the project within the school and parents also are in favour of it. We were conscious that to get the support of parents for the idea, the classes would have to be low cost. Many parents are struggling financially at the moment and we knew it would not get parental approval if it was going to cost a lot,” she added.
She stressed the importance of music to children. “There are so many benefits to a child learning music. It is hugely enjoyable for them. It is a very social activity and helps them to work in a different kind of team. It also provides them with a skill that they can enjoy themselves and entertain other people with. It is also wonderful for brain development. Education is about so much more than providing children with academic skills. It is also important to provide children with other opportunities and skills and music is a fantastic way to do that. The idea is to run this programme this year, then review it and hopefully expand it,” she explained.
Fiona was not aware if there would be another series of Music Changes Lives but added that if there is, Ennis National school would love the opportunity to be involved.


Should a plebiscite be held on the boundary extension?

Don't Care
Posted by Cathy Desmond at 1:10 AM