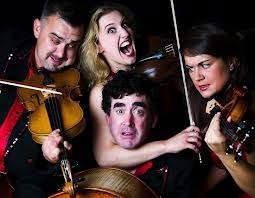 Some years ago , while on holidays, my family found ourselves at a festival performance by a comedy string quartet by Le Quatuor, a well established French comedy string quartet .  Our expectations were fairly low but the mix of highly skilled string playing combined with well honed comedy routines kept teenagers and adults enthralled for two hours, somewhat to our surprise.  I suspect that Graffiti Classics owe some debt to this group for paving the way for this strange hybrid  mix of high and lowbrow entertainment forms.

Graffiti Classics are a comedy string quartet with the usual cello replaced a double bass with infinitely more inherent comedic potential which front man Cathal O Duill makes a good job of exploiting The humour doesn't overshadow that they are individually extremely accomplished musicians. The violinists particularly displayed some dazzling pyrotechnics in a Romanian 'Birdie Dance' . Violist , Stephen Kennedy's treacly  baritone voice  added a richness to the mix and the O Sole Mio/ Presley sing off with Kennedy and a O'Duill was hilarious.  They opened their set with a hoe down version of Thus Spake Zarasthustra.  It is no small feat that they perform their set from memory with not a music stand in sight .

It could not go unnoticed that the audience was  to say the least - 'sparce'   and the comedy potential of this was  naturally exploited as it could not possibly be ignored. Performers among the audience appreciated the added energy needed from the stage to make up the  energy defecit from a small house.
Afficionados in the audience included Paul Quinn of  The Speks and Marie Pyne, director  of the Forever Young Choir. Have a look at the video below for a flavour . They are performing around the country this week.  More details in this article from Journal of Music

Posted by Cathy Desmond at 1:19 AM