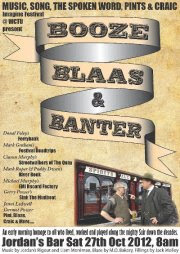 There we were, 20 or so of us,  huddled in a queue outside Jordan’s pub on the Quay in Waterford City on a Saturday morning at 8.30 am. As motorists passed us by there was one or two scornful looks suggesting they felt we were waiting for an early house.
The Imagine Arts Festival  committee conceived an early morning pub session with music, talk, social history, readings a bit of banter and the ubiquitous blaa with red lead.

What a brilliant idea! It worked. The place was jammers for an eclectic mix of musicians, poetry, song and reminisces all loosely based on the adjacent river and the sea.

The event was adroitly chaired by Ciarán Murphy who has recently published his book 'What Happens On Tour'.

The music was anchored by local stalwarts Tom Mullane and Liam Merriman. Mullane sang some  self-penned songs including a sea shanty about Dunmore and one about a former Sailors' Rest in Henrietta St. which was based on a a photograph.  Merriman sang a great  Jimmy Nail number about the sea and  Newcastle. There was contributions in a similar vein from Michael Hayes and Paul Dillon .

But it was the spoken word that  anchored the morning. Mark Roper  a poet read a  vivid piece from his recent book about the  River Suir. You can listen to him here.

I was honoured to make a contribution myself and played a Déise air and you can hear it here.

An extract from Three Villages the memoir  by the  legendary journalist Donal Foley from Ferrybank was read by his daughter Deirdre Morrissey. There was talk afterwards of developing an event to commemorate Foley who many will recall from his Man Bites Dog column in The Irish Times. I look forward to that.

Local historian Dermot Power spoke of his work on the street names of Waterford.

Ferrybank man Dick McGrath delivered a lovely talk on the former EMI radio factory over the river and his efforts to track down a photograph of the employees from the 1930’s for his mother. You can hear his talk here. An LP of Pink Floyd was passed around for examination. It was pressed in Ferrybank. Not a lot of people know that.

The famed Waterford blaa was not forgotten and Raymond Roche attired in a wonderful branded shirt spoke of the legendary Roche’s blaas from the Glen which had its origins since 1886. A recording of his talk is here.

listen to ‘Roche's Blaas by Raymond Roche’ on Audioboo
Blogger of the Year ( jealous -moi? Bien Suir I am!) and conker champion Mark Graham  was in the pub and he told us about his life choice that resulted in the purchase of a camper van and a never-ending round of Irish festivals.  I loved his iconic story about the fisherman losing the run of himself based on a dolphin.

The star of the morning was John Molloy former publican and sailor. His memoir called ‘Steady As She Goes’ was unknown to but I’ll be chasing it down. He read two pieces one concerned the hunt for a radio broadcast of the 1959 All Ireland hurling final between Kilkenny and Waterford whilst based near Malta. The second, based on a colourful bunch of sailors going to confession was hilarious. You can hear his readings here and be warned it contains strong language and sexual references (that should boost the listeners! :-)

There an excellent dramatization of a piece about a streetwalker performed Shauna Farrell and written by Ciarán Murphy
Actress and Waterford native Jenni Ledwell read from  a soon to be published novel by Io Curtin with the author in attendance himself. Performer Konor Halpin gave us a comedy interlude with some good gags about the recession.

The concept of the gathering was simple but made for a thought provoking convivial morning full of local flavour and let’s hope it is seized on by others so that mighty range of spoken word talent is cherished and encouraged.
Congratulations to the Imagine Festival committee and John Cloono for putting together the morning. More please!