The South East  was bathed in sunshine as I travelled to Wexford  to sample some of the fringe events at the annual international Wexford Opera Festival.  At the Jerome Hynes Theatre at Wexford Opera House there was a full house for  a  sparkling morning recital celebrating the bicentennial of  the  born, William Vincent Wallace.   Pianist and broadcaster Una Hunt is well known for her championship  of  less well known 19th century  Irish piano composers and her extensive Moore recital series  .  Wallace has a particular resonance with my youthful musical memories and no variety show in Waterford was complete without a rendition of Scenes that are Brightest or In  Happy Moments. The  piano pieces may be salon trifles but are very  virtuoso in character and present considerable technical challenges which Ms Hunt tossed off seemingly effortlessly following interesting informative introductions. The real surprise of the morning was mezzo soprano ,  Rachel Kelly’s impressive performance of the Wallace songs . Announced as a  stand in for Marie Flavin,  a sylph like Ms Kelly appeared on stage dressed  in long red dress and costume jewellery .  From her 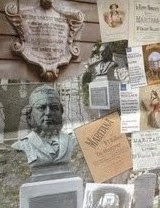 opening phrase she had the audience enthralled as she stepped into the character of a demure 19th century salon debutante,  whether singing wistfully of secret unrequited passion or animatedly about the joy of Spring. One to watch out for and  I look forward to hearing her again. Looking at the festival programme, it is remarkable that Irish singers are thin on the ground in the cast listings.  The lunchtime recital being  full,  I went  instead to the Spiegel Tent and there was an echo of the morning  when Declan Gorman reprised Rachel Kelly’s encore of Balfes’s, I Dreamt I Dwelt in Marble Halls  in a scene from his  one man Joyce show Dubliner’s Dilemma


Leaving behind the delights of Blaas and Banter of Waterford Quayside,  the lobby in White’s Hotel didn’t have quite the buzz  I expected for a Saturday of a bank holiday weekend.  Perhaps the  lower footfall was due to  the relocation of the afternoon short works series to a school hall about ten minute walk away.  While  the singing was  fine and aspects of the production were very funny and clever, I failed to be transported to the realm of the Queen of the Night  by Roberto Recchia’s  Festival production of Mozart’s  Magic Flute. It was difficult to conjure up the illusion that you were in an anteroom to Sarastro's Temple sitting on school chairs at the back of the long rectangular  space Neither was the show 'short’  by the usual festival standards running at over 1hour 45 minutes and there was a steady drift of patrons from the ‘auditorium’ during the second hour.  To quote Emporer Franz Joseph there were  just ‘too many notes on a sunny afternoon by the coast.


Notes    I stumbled on the Spiegel Tent on my second trip and thought it was a great addition to the Wexford fringe experience. I was surprised not to see the Spiegel Tent events listed in the Fringe Festival publicity material or  on the Wexford Fringe Festival website and was sorry to miss an event  that I would have enjoyed.  Surprising too that there is no link on the the main festival site to the fringe and vice versa.  The information on lunchtime recitals was sketchy.  Why not have a  big daily notice board in prominent location with all the days events listed and ticket availability  as in the Kilkenomics Festival  .