For the second time  I stumbled on an interesting musical  experience in Belfast. There I was looking for a spot for a quick lunchtime coffee and sandwich and a sign outside the Black Box music venue caught my attention. The Green Room within  had organised a daily lunchtime 'listening session' where an album is played uninterrupted   as you dine.It was part of Belfast Music Week

My luck was in as the album du jour  for my visit was Astral Weeks by the local lad Van Morrison. The work was released in 1968 when Van was just 22. It  and has big connections with the city and  includes songs such as Cypress Avenue and Madame George. It was reputedly recorded in a few takes.

The classic album  was played on the traditional  turntable and the original artwork was passed around for the perusal of the audience.


The attendance consisted of some s obvious  aficionados of the great man and others, content to listen and chat. And the coffee and snack were good too, 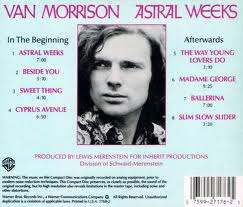 What a genius  idea and one that should  be replicated elsewhere.