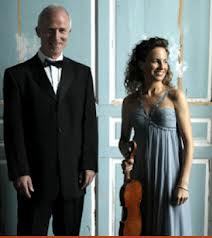 'We do love to play Beethoven' Catherine Leonard exclaimed during her recital with duet partner Hugh Tinney at Cork School of Music on Thursday.  Two sonatas , both in A major made up the bulk of the substantial programme.  I am always impressed with the passion with which this petite violinist infuses her playing.  Quite how her slim arms produce such energy and force  in  performance seems incredible While the Kreutzer may be  mightier, my favourite moment was the lovely lyrical  adagio of the  opus 30 which seemed to spill effortlessy from Ms Leonard's instrument.   I was struck for a second time this week by how effective a bit of pizzicato can be . Lisa Knapp used her fiddle almost like a ukulele and the pizz in the Ravel is an important element in the 'Blues' section .

I was too late for more than a taste of the first piece by Raymond Deane, (commissioned I notice by the Arts Council,  ) but the composer's own note described it as being at times delicate , an intense elegy and a ferocious toccata ' helpfully pointing out some clever wordplay in the title Parthenia Violata . The avant garde piece drew some raised eyebrows from latecomers waiting in the wings .

Looking very elegant in full length empire line jade green dress, Ms Leonard, one of the most successful graduates  of the school was greeted by an almost full house including  many family members and friends .  We met  cellist, Frank Garvey and Catherine's former teacher Una Kindlon  among the listeners.   There were excellent programme notes courtesy of Francis Humphrey's of West Cork Music

Posted by Cathy Desmond at 4:55 PM