My Selection of the Best Acts at Waterford Spraoi Street Festival


The front page of the Irish Times on Saturday features a photo of one of the  Waterford Spraoi Festival  performers, Professor Plunger and it is heartening to see Spraoi enjoying well deserved national attention. Over three days the  city is host to a plethora of street theatre entertainments both local and from overses serving up what must be the best value and most inclusive  festivals on the circuit with most of the entertainment being free  and open to all. The improvements in the city in the last year are striking  and the confluence of architectural elegance  both old and new around the Bishop's Palace is remarkable .

The Mall hasn't been used as a venue before and I went along to hear Adrian Garrett's madcap violinist act, Sid Bowfin outside the Bishop's Palace. The large open space makes it very good for a large crowd but as it is a national characteristic to aim for the back pew, it presents quite a challenge for a solo entertainer to draw the audience in closer in the space that extends both out and up steps to the terrace of the Palace. The high energy act involves much ad libbing and interaction with the crowd as this very engaging entertainer ploughs through a couple of well known classical favourites . It was quite a novel audience participation feat to get the audience to canoodle for Pachelbel's Canon and the passing of amenable Muc Potter on his BMX  bicycle with rear wheel bars was used to great comic effect. His violin is more than a mere prop and he plays very well indeed and the audience young and old loved it.

Spraoi veteran, Gareth Jones had a large crowd gathered for his escapology routine involving a roll of clingfilm. The audience volunteer has an onerous role here involving wrapping him in the stuff and crucially punching his airhole in time to avoid unfortunate consequences. There was a difficulty here with sound spillover from a nearby dance act putting a strain on Jones vocally and  as there was more passing pedestrian traffic here than at other venues, he  had a  lot of fun at the expense of tourists leaving and entering  a nearby visitors' centre. Performances by local groups are a mainplank of Spraoi's activity and Barrack Street Concert Band represented the host city admirably. 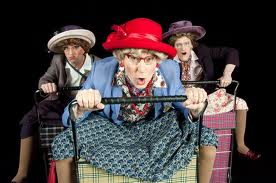 There was a good crowd for the performance art, Page Blanche by Compagnie Luc Amoros act in Bolton Street Car Park at sunset. The act featuring a live double bass player with a hypnotic percsussion driven backing track with 6 scaffold mounted artists painting a changing sequence of  9 square frames of polythene. Political consciousness raising graffiti was an element with voiceovers from the artists in this innovative act combining several dimensions.


There was a lovely buzz in the Park  on Sunday with lots of families, kites and  giant windmills with big queues for the icecream van  with plenty of room to manoevre prams and buggies. The venue was ideal opportunity to catch some of the acts we had missed and our favourites were the side splittingly funny segue/shopping trolley mounted three home counties ladies, Granny Turismo who had something of the Flanders and Swann era about them and the charming Italian  novelty acrobatic duo, Piano C:Senza Che who proved that some people really can look fantastic in a plastic bin bag.

﻿
Regrettably, one of the very few negative aspects was the  deep and loud  pulsating noise  emanating from  a sound system  in the band stand  that permeated all corners of the park  for a while spreading an aural sludge that conflicted with  the less powerful forces of solo accoustic acts and radio frequencies of smaller sound systems. It would have been good to have had a band in the bandstand to add to the leisurely Sunday afternoon atmosphere.

Ths parade was wonderful and in the daylight I could see more of the wonderful detail in the costumes and  great to see youngsters performing alongside veterans of the local theatre scene.


My family love Spraoi and  while we have missed a year here and there, we  have been at most of them . We love the outdoor performance element, the variety, the freedom to walk away if |  not amused and the accessibilty and mass appeal  of a weekend of free entertainment,   I love the mix of local acts with exotic visitors from overseas and the common talking points to mull over in the following days. The many  volunteers visible in their bright tee shirts seem cheerful  and enthusiastic and while numbers appear to be a little  lower after the Tall Ships influx, there are still plenty of spectators to create the Sproai atmosphere.  It is a great feat of organisation to marshall so many forces  in this consistently  well organised event  which remains true to the original concept and we never cease to be amazed at how good it is . We remain grateful to the huge team for years of  fun  and entertainment for all our family and hope it goes on for ever . Bravo  and thank you! to programme director Miriam Dunne, director  TV Honan and all the   Spraoi team and to the many sponsors including Waterford City Council, Fáilte Ireland  and the Arts Council.

See more of Shane McDonalds photos of Spraoi  on
http://www.flickr.com/photos/shanemcdonald/5998900748/
Posted by Cathy Desmond at 3:56 PM