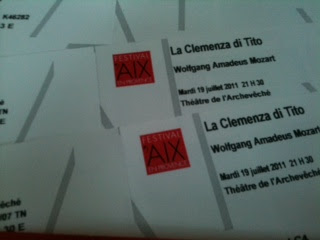 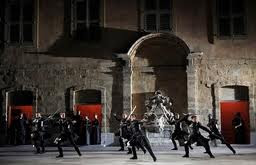 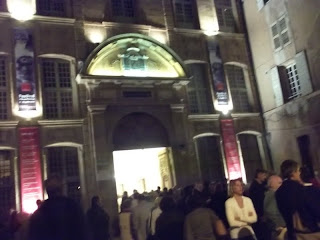 L'opera at Aix en Provence
Having left the hurly burly of OFF Festival Avignon, we arrive in Aix en Provence to take in the more refined pleasure of the entertainment offered and secured a few tickets for the production of  Le Clemenza di Tito at the Theatre de L'Archveché. Adjacent restaurant tables are at a premium and we join the hoverers and manage to secure a table with a good vantage point to allow a little schadenfreude  at the view of the fil d’attente  which for once we are not in  and to look at the procession  of arriving operas goers. It is a relief not to be plastered in fliers and to  have to balance between nodding too encouragingly at actors beseeching you most graciously to 'aller a leur spectacle’ and indifference. The audience are mostly elderly and comfortably attired . This is not a bejewelled and tuxedoed gang  and we need not have worried about being underdressed. The show starts late at 9.30 to allow for the optimum lighting in this large outdoor courtyard theatre. The seats and side panels are in a fine silver  hard wood and there are monitors for surtitles discreetly set into  the panels on either side.  Having climbed to the top of the Amphitheatre in Orange  this is a piece of cake.

The LSO under Sir  Colin Davis are in a sunken pit but all the orchestral colours are clearly heard with the clarinet solos particularly prominent in this score .  Although with characters from Ancient Rome the costume is 18th century with most characters in black or shades of grey with only Tito and Servilla in white.   The Estonian chorus sound splendid and the bit of choreography from the sword wielding guards adds some  welcome diversion to the action on stage.

While opera plots are not known for their complexity, this one seems more flimsy than most.  There is a good girl (dressed in white)  and a bad girl (in what else –black)   Jealous bad girl, Vitellia (Italian soprano, Carmen Giannastasio) takes umbrage when Tito all in white, (so presumably good guy),  chooses another and begs basically confused  guy Sextus (in grey) to kill Tito  who also happens to be a good friend and Emporer of Rome.   Tito having called it off with unwilling good girl  (Brahim- Djelloul) finally comes around to idea of marrying bad girl too late to stop  confused  guy who attempts to kill Tito  and burn down Rome while he is at it but makes a mess of it.  Good pal Annius a guy (but also  a girl)  tells Sextus to fess up and ask for clemency while bad girl has much to lose and advises him to run for it.  Good boy and bad girl confess all and in an anticlimactic ending Tito forgives all so alls well that ends well.   This is just the sort of plot one imagines Mozart had in in mind in the scene from Amadeus where he pleads for permission to write a good German opera. We are grateful for the surtitles which allow us to follow the libretto with school French.
The singing is very fine, Sarah Connolly looking very much the part and carrying much of the hard work in the role of  Sextus. Anna Stephany sang very well but had  a somewhat insubstantial stage presence. Overall wih the predominantly female cast the production  lacks a masculine edge. American tenor Gregory Kunde  in the title role is supported by Darren Jeffrey as Publio, leader of the guards.
The audience did not applaud between scenes and the action flowed seamlessly.  The production looked flawless and the lighting effects were effective  particularly in creating an impression of a burning city. Any milking of  applause was discouraged at the close by the house lights going on as the performers and conductor, Sir Colin Davis were taking a final bow and the scramble to leave the stage before the audience made for the exits was a little undignified.  They might might have been allowed a little longer to bask in the glow of the appreciation of the production.
We enjoyed this performance, the playing and singing was very fine. We flagged a bit in the second half as it was late.  We loved the theatrical courtyard space inaugurated, I understand, in 2007 and the subject of some controversy according to a review in the Telegraph.  Being used to outdoor events in chillier temperatures we did not seem to feel the chill which saw most of the other patrons wrapped up in the fleecy blankets provided.
On a practical note anybody looking for a taxi in Aix after midnight should be warned they are thin on the ground!