Pirates, a Parrot and a Putative President Friday at Tall Ships

On the North Quay, the crew of the Columbian vessel, 'Gloria' were perched
on their rigging and singing in unison like some exotic songbirds. On the South Quay, John Murray (assisted by Ennis man Colm Flynn)  clad in fishermans cap to keep the sun off was interviewing Waterford folk outside the RTE tent . I was too late for Brendan Bowyer and Brass and Co but I caught the very hardworking sea shanty group, Hooks and Crooks in one of their many performances of the weekend who closed the programme with a rousing O Ro Se Do Bheath Bhaile  following the discussion and competition to find the best Waterford accent. It all hangs on the ulvaral rrrs apparrrently!  In Bolton Street the gangs of marauding pirates could be contained no longer and swarmed onto quays colliding with presidential hopeful Michael D Higgins (sadly not in costume)  on his way to do an interview on WLR. The pirate count stopped after 4000 to the chagrin of late arrivals. These pirates came in all shapes and sizes and one even had his own live parrot! 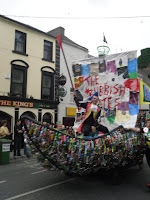 'From Ship to Shore' exhibition housed in the converted Greyfriars Church was well worth a visit with an eclectic range of maritime paintings, prints , photos and watercolours. It was  poignant to see the bell and compass of the late lamented Asgard  11 on display here a reminder of the dearth of Irish boats represented.  The craft village was a hive of activity and you could see spinning weaving and glass blowing in the Cathedral Courtyard. Fran Ryan's Dingle Knits looked very tempting indeed.  From our perch in the Tower Hotel Bar we could keep an eye on the tennis semifinals and watch the  Crews Parade 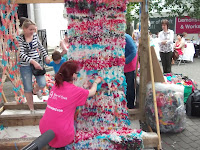 The Springstreens launched the activity  on  the Plaza in the afternoon which was rounded off by a splendid massed bands concert combing the efforts of Waterford City Brass , Barrack St Concert Band and De La Salle Scout Band. A lean and angular Mike Scott,  the epitomy of a Raggle Taggle Gypsy in brimmed hat and leather jacket to keep out the nippy evening air and Steve Wickham of The Waterboys looked liked they were having fun at their rocking set at Bolton Street dishing up a set including their many hits  Of the numbers I enjoyed the slimmed down duets most with Wickhams wonderful playing at its most audible. .  From the plethora of food stall, local grocer Ardkeen Stores stood out for the sheer size and range of offerings.  The Saffron corner smelt gorgeous.  My companion  had a tasty chorizo and bean stew from Mediterranean Kitchen but my paella  from another stall was disappointing,  gluey yellow  rice and chicken is not a 'paella'  in any culinary dictionary.  When all was said and done, it was hard to beat Dooly's chips eaten from the box
on the wall in the park.

More fun to come tomorrow and the weather promising fair.