Lend us your sails, your stories too,
Taller than skytails in the blue,
Stowaways to the future
Lend Us Your Sails.

The Tall Ships Festival was officially launched on Thursday afternoon  in Waterford with a world premiere of a specially commisssioned cantata for choir and orchestra as the focal point of the opening festivities. The work commissioned by the Waterford Choirs Association features rich settings by five composers  of  poems by five  poets, all  with strong Waterford connections with the recounting of the city's maritime history a common theme. I love the pithy  narrated interludes by Michael Coady set by Marion Ingoldsby.  Even the titles hinted at the richness of the lines. Eric Sweeney's  semiquaver rhythms of A Prosperous Port contrasted with the more stately metre of Greg Scanlon's settting of Calico Dress sung by mezzo soprano, Bridget Knowles. There was a rousing anthem, Come The Sails to finish with a setting of words by John Ennis in a setting by my contemporary Sue Furlong well known in liturgical  composition and choral circles. It was good to see young poet Megan Nolan included in a setting of her poem, Child of Mine by Ben Hanlon,  known throughout the land for his work with De La Salle Choir.

The choir clad in colour coded tee shirts and orchestra met for a final rehearsal before adjourning to the courtyard of Christchurch Cathedral where mountains of sandwiches were consumed and tea drunk before we returned fortified to the splendid William Vincent Wallace Plaza with fingers firmly crossed for fair weather.  Enda duly arrived accompanied by his entourage and Derek Mooney bounded on to the stage to crack open the champagne , so to speak, on the procedings.


﻿
﻿
There was an anxious moment when a technical problem with the microphone forced a restart but conductor Niall Crowley calmly waited for the nod and on the second go the 200 strong choir and 40 strong orchestra were off. There was the menace of rain threatening to spoil the party but it mercifully didn't spill.

Contemporary  music by Irish composers does not often receive such a large audience for premieres.  Afficionados I spoke to praised the innovative work  drawing on Waterford's rich history and maritime heritage and it is good to see the city further cementing its reputation as a hot spot for new music. (See my report on  Waterford New Music Week).  Huge credit is due, I understand, to Niall Crowley of the Waterford  Choirs Association? producer Joan Dalton and the Waterford City Council for bringing   this project from a good idea on paper to an actual performance. For myself, it is  many years since I performed with an orchestra in Waterford and it was thrilling and a privilege   to take an active part  in this gala day in my home city.

Déise Abú!
'Magnificence of rigging above a mile of quay' Mark Roper 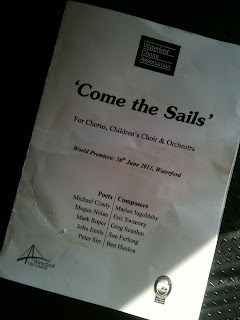 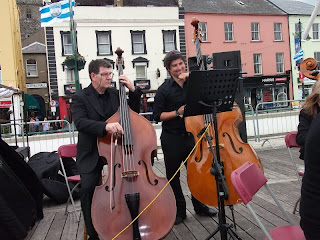