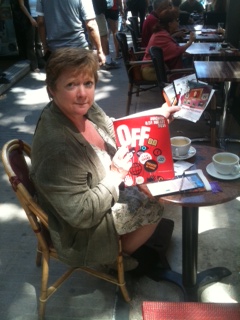 I am wary of committing myself to anything coming under the general title of 'spectacle' after an unhappy experience a number of years ago. Judging by the colourful posters on every billboard I had understood it to mean an entertainment in a chateau with if not hundreds a sizeable number of  actors clad in medieval costume and with some horseback jousting, blood and guts thrown in but I was shaken out of this misconception on attending a ‘spectacle’ in a  splendid Loire Chateau where after purchasing our billets, we were locked in a sealed interior chamber  with two no doubt very fine  actresses who intoned what seemed very dreary tales of Le Fleuve . All this following a buffet FROID and one petit verre de rouge. 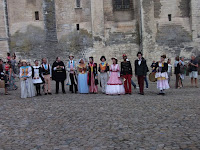 Suffice to say it was not a highlight of the trip and the term 'spectacle' has become a by word in our house for entertainment falling far short of expectation. 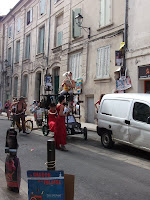 The OFF Festival in Avignon promised a feast of 600 spectatcles. I gather like Edinburgh the official festival takes place in formal venues and consists of grand presentations and exhibitions and all info contained in a handy fold out paper poster. The  fringe or OFF  requires something the size of an Argos catalogue to give you even the briefest outline of what is on offer. Even limiting ourselves to music and dance presentations the choice is bewildering. Each back street has some sort of theatre space with room for anything from 25 or so up . Each presentation lasts an hour and there are 8 or so different acts presented in each venue every day. Most acts are in situ for ther 3 week duration and present once a day . The performers spend most of the remaining time going to other spectacles and prowling the streets presenting a soupcon of their wares and pressing fliers and reviews  to all in their path with a combination of graciousness and persistence.   No corner of any restaurant is immune , they will find you and seek you out and to stand still for any length and you risk being covered in your body weight of fliers.After a while we learn not to catch an eye to save them wearing themselves out beseeching our support while we nod as though we understood every word. I feel a nagging  sense of guilt not having made my way to a particular street circus troupe who pressed not one but two photocopied reviews and a free ticket . I did at least read the reviews and peut etre ' l'aneé prochaine' .
Our first attempt to see  the spectacle, Vox Populi was unsuccessful and as we insisted on joining the fil d'attente the penny dropped that Jour impairs meant alternate dates . Juste Des Chansons in Pittchoun Theatre  with young Parisian chansonier  Etienne Luneau was quite an intense experience for a lunchtime and fans of Camille will like his dramatic delivery of his own songs in the theatrical vein in sophisticated arrangements by Joseph Robinne worth it alone for his fabulous  duo of accomplices. Clement Duthoit showed what an effective bassline a bass sax can be and varied the timbre with a selection of wind. Robine on piano and accordion added that boulevardier element. It deserved a  larger house than the dozen of us gathered on this particular day.

Beethoven ce Manouche ( The gypsy) is essentially a three piece jazz swing session with the pianist dressed in 18th costume and a the guitarist sporting a tache a la Django with a small hirsute bass player  ( reminded me of Animal from the Muppets) dressed as an angel keeping the two boys in check as they rehearse  for a party in heaven for St Peter .  The audience of different ages love it.  In the Petit Theatre de Louvre, Cecile Girard's presentation Cello Sur Canape (Cello on the sofa) was essentially a solo recital with a few chansons thrown in and some anecdotes about her musical journey. There is humour as one would expect from the musical director of the very funny Le Quattor and while she is very charming and full marks to her in her efforts to win over her audience, I didn't find the solo element albeit with some duet backing tracks quite satisfying enough preferring the collaborative efforts of the other spectacles we see. She includes quite a bit of Irish repertoire with  the reel The Silver Spear the slow air Bean in Eirinn coming over very well.

﻿
The larger Golvine Theare was packed for one of the hits of 2010 festival. Road Movie Cabaret was all about the chansons with the device of the characters playing a travelling raggle taggle band as a pretext for the performance. Versatility is the name of the game and key musician Cedric Molllié played a selection of strings and piano but mostly on viola to good dramatic effect. We loved the version of  Blake's Walking in the Air  or Dans Le Ciel .

We stayed two nights in the Etap Hotel in Boulevard Domenique just outside the magnificent walls which was cheap and cheerful and all in all nous somme tres bien amuées at OFF in Avignon. We specially liked the al fresco piano playing at restaurants at bustling  Place Celestin. 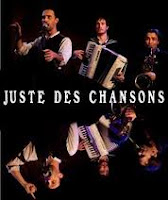 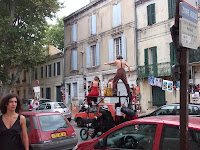 Posted by Cathy Desmond at 8:31 AM