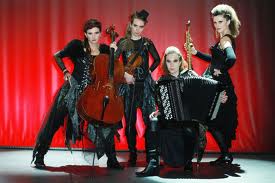 The production  of Dido and Aeneas at Cork Opera House last night combined superb singing with innovative staging, inventive orchestration to produce a fresh contemporary take on the English Baroque opera classic.
Originally produced  in 17th century for a London  girls' school, it is  rare gem in that it combines an English libretto and with loads of singable tunes and remains for me  one of the most appealing and accessible works in the genre . Although frequently performed as a concert piece ( my review of  Waterford International Music Festival here) , in this fully staged production, director John O Brien places the action in a Gothic world intensified by the extreme angles of a set of giant geometric shapes which rotate and glide throughout the production combined with projected nocturnal skyscapes.  The lighting is subdued exaggerating the shadows and intensifying the dark world of seething emotion.

While the staging is impressive, the most innovative aspect of the production  is in the treatment of the orchestration.  There is no need to book a ticket near the front if you like to peer into the pit. The curtains open with the musicians on stage in gothic costumes elevated from their usual position in the pit to taking on the role of  all singing, dancing players . The original string orchestration by violinist Marja Gaynor is rejigged for a  salon ensemble of violin/viola, clarinet/sax. accordion and cello all performed theatrically from memory , quite a feat.  The baroque elements are mixed with other genres in the musical cauldron and there is a strong whiff of Klezmer with the high clarinet and sax lines. The tango treatment of one of the numbers reminded me of the orchestration of Roxanne in Baz Luhrman's  Moulin Rouge   It is a tight ensemble piece with eight players in total.  Cara O Sullivan looks suitably regal and also sings role of sorceress as an altar ego. It is lovely to hear two local divas of international standing with Mary Hegarty playing Belinda.  A punk looking Catrin Johnsson  completes the  coven . Simon Morgan recently seen in Opera in the Open (my review here)  sings the role of  heart breaker Aeneas , the jaunty sailor and spooky spirit, the latter a device requiring him to sing while operating a ghostly ventriloquists dummy .
All elements old and new combine to produce a theatrical delight that should work really well on the festival circuit in medium sized theatres with flytowers.

Irish Times Review here
Posted by Cathy Desmond at 11:30 AM