﻿
﻿ Following fast on the heels of the Imagine Arts Festival, my home town Waterford cements its reputation as a good town for music and arts  with the  welcome return after  a two year absence of  the annual celebration of musical theatre, the Waterford International Light Opera Festival. Now  in its' 50th year,  rebranded as Waterford International Music Festival and incorporating not only shows at the magnificently refurbished Theatre Royal but also a fringe festival including the all pervasive gospel choirs,  concerts and a school musical section .


Ours was a brief weekend visit. My must see event was the WIT production of  Purcell's opera Dido and Aeneas at Christchurch Cathedral, Waterford on Friday.  It is not quite  two decades since I lead an ensemble for a performance of this also under the aegis of WIT , an experience which remains one of the highlights of my playing experience.  The constant in this equation was the presence of early music heavyweight Malcolm Proud at the harpsichord.  On this occasion he was joined not by a assorted  band of students and locals but  by Camerata Kilkenny, a quartet of period baroque instrumentalists who played with  satisfying bite and attack. The second violin player (Marja Gaynor)  and bass viol particulary seemed to  communicate  very well  within the ensemble.
The conductor mezzosoprano Brigid Knowles set a brisk and energetic pace  throughout and the performances from all the soloists were  competent and controlled. As befits baroque opera they were all very even . No one stood out apart from perhaps   the more mature baritone,  Dermot Doyle's  Aeneas and the witches were very good, suitably 'cackly' . The young choir fired by her enthusiasm sang with great earnestness, well in tune and and with good dynamic contrast .

The music is glorious, fun , florid and achingly sad in parts and the Cathedral venue was a lovely venue in which to hear it. (Thank goodness for cushioned pews) As I came away , it was still relatively early (thanks in part to the brisk pace and tempi of the performance) and the empty seats through the open door of the Theatre Royal stalls beckoned patrons in for the second half of Nunsence but I resisted the 'Temptation to tackle the Timestep'  of more than three centuries for another all- female cast ( well nearly -not forgetting Aeneas)   and opted to savour the delights of the Baroque for a little longer .

A| top class G &;S production seemed less of an anachronistic indulgence with only two centuries to bidge and on Saturday night the Theatre Royal seemed the perfect Victorian space to view South Anglia Savoy Players very entertaining  production of Pirates of Penzance.  We picked up tickets in the Circle on the day at €30. It was wonderful to enjoy an unamplified production by these reknowned G&S specialists.  Nothing disappointed. The sets were beautifully painted, the costumes were splendid , the choral numbers par excellance. every syllable clearly annunciated.  Their rendition of Hail Poetry was a stand out moment and reprised later in the Munster Bar .  While waiting for the adjudicator's report, an elderly gentleman asked me if I approved of the portrayal of the  Sergeant of Police as a 'nancy boy.' Patrick Gallagher not only having a great voice  got great comic mileage from his camp portrayal of this role and I loved it.
A trip to the Theatre Royal is always nostalgic for me as I had my first experiences of theatre both as viewer and musician in this auditotium.   With the orchestra pit now sunken, I miss being able to watch the orchestra at work. The  I was delighted to meet a former teacher,  orchestra leader Teresa Costello  and former deputy leader Patricia Cuddihy now retired after 40 years service in the pit.  It was good to see Kevin Kavanagh former Musical Director in the audience.

The cast and punters adjourned to the Munster Bar where the cast continued to sing their hearts out with the hardworking MD Stepehen Kenna at the piano.  It was great to hear a selection of English party songs  for  change.  I met Peter Fitzgerald  of the       Munster Bar who confirmed the very real boost the reopening of the festival and the Theatre Royal  (opposite the Waterford Glass Centre reopened earlier in the year) is giving to the Mall and Waterford in general. 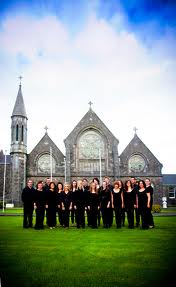 With so many singers in town over the ten days, I think there is considerable  scope to expand the fringe. While I enjoyed the informal post show sing song, it tends to be around midnight before the informal singing gets going I think it would be good to hear a comany do a short selection of their numbers in a public space during the day. The Granary restaurant ,  central library  , the Book Centre spring to mind as places that might work   How about 'Flashmob the musical' in City Square Shopping Centre? It was good forward planning to include the  live screening of Tosca from the Gaiety at Garter Lane Centre on Thursday and good to see a free event on the programme. The church service I attended in the Friary was a rather sombre affair with not an eek  from the  organ or a verse of a hymn to cheer the proceedings  which I regretted  particularly as there were several festival artists in the pews. I looked in to Christchurch where I was just in time to hear some splendid organ recessional music and see the choir in their bright red and white regalia process out,   all rather more cheerful.

I await the news of the winners. My sources tell me that Jekyll and Hyde presented by Stage One New Music Group from the border counties is a strong contender for Best Show. We'll see!