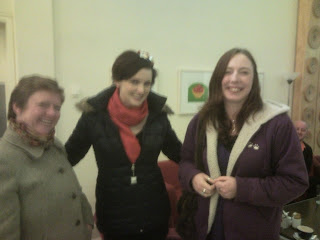 I note that it is the third Saturday of the month which means it is Clare Poets afternoon. I  am surprised to see  songstress Julie Feeney is  listed as the guest artist Surely some mistake.  My twitter updates suggest that she is probably winging her way across the Atlantic following her US tour but Julie duly arrives hotfoot from the airport  ready to perform at the monthly gathering of Clare  poets at Glór Foyer in Ennis  .  The procedings kick off with guest poet Kevin Higgins reading from his new collection .  His satirical  poems have a wry humour and there is an AA Milne ring to a poem dedicated to protesting students with its recurring lines  'who made their point politely and then went home'  probably to watch Countdown (my words not the poet's).
With the MC's lack of familiarity with the guest artist's work I am called upon to give a late  introduction. If only I had known I would have prepared better.

Julie, looking every  inch the star performer in high heeled red patent leather shoes which doubled as  percussion instrument and her trademark quirky millinery, punctuated procedings with a selection of numbers from her Pages and 13 Songs albums to her own piano accompaniment. With no trace of jet lag in her voice she performed for the select gathering with as much intensity  as if it had been a packed auditorium ; a consummate professional  .  The late Brecan Mooney was  remembered and  Brian Mooney his father,  read a poem dedicated to his son's memory.
The open mic follows with  MC Patrick Stack, Johhny Culliney , Jean Kavanagh, Noel Mulqueen , Fred Johnston (accompanied by his dog) and Arthur Watson contributing . I loved Arthur's performance of the Karaoke Blues . I must look up the Portsmouth Sinfonia  he referred to in his introduction. It sounds like my kind of band .
A very special afternoon in Ennis with the Clare Poets .
Julie's selection
Mr Rovin Eye Guy
Scots Gallic number
You take the Wind Out of My sails
You're Impossibly  Beautiful
With Innocent Hearts and Expectant Faces/Knock Knock
Grace
Posted by Cathy Desmond at 11:08 PM