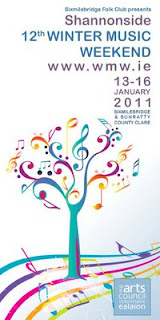 For me, the surprise hit of the evening was troubadour, Jimmy Crowley, singing to his own accompaniment of a variety of bazoukis and guitar.  He seems to have disappeared from view in recent years and I gather he spends a lot of time in the States.  His set was all too brief and there was a sense that Jimmy was only just getting in to his stride. I always raise a cheer when any  performer lauds the Irish American ballad and Jimmy spoke warmly  and convincingly of the merits of this repertoire and   performed a couple of old favourites ( Dublin Saunter and yes, can you believe it, When Irish Eyes!) to very skilful guitar accompaniment. He has recorded a selection of such repertoire with the wonderfully named Blue Macushlas.  If Keith Jarret doesn't feel embarassed about performing My Wild Irish Rose and its ilk, why should we.

There was a break for tea and sandwiches .  There is  something so civilised about being offered a cup of tea during a gig. I love it . I was delighted to meet local musician, Niamh Phelan who tells me she is working with the ICO string project in Limerick schools, an area I am working in myself  (see http://www.swingingstrings.blogspot.com/  fort further details ) . I was delighted to meet Joan MacDonald, niece of Maeve Smith well known Dublin based piano teacher.

The crowd thinned out a little at this point, the lure of veteran rockers Loudest Whisper proving a draw  at the Mill Bar

Finally Sliabh Notes with  fiddle player, Matt Cranitch took the stage and played through a set of Sliabh Luchra tunes  punctuated by the odd song from Tommy  O Sullivan.    It was good to hear polkas and slides in reel obsessed Clare but at these late night accoustic gigs, I do long to hear more of the slow air repertoire and the rendition of Aisling Geal on fiddle accompanied by guitar was for me the highlight of the gig.  I spoke to Matt  briefly following the gig about his own involvement in school music projects in West Cork .

As always , I marvel at the sheer organisational feat of organising this festival . The Courthouse for me is one of  the best accoustic venues in Clare. The artists are physically occupying the same space as the audience which is conducive to generating a rapport. Brendan Walsh is to be  congratulated for bringing so much fun to this corner of Clare for the last 12 years.  So much of it we missed but it was great to be in the Courthouse for the Saturday night gig.  Bravo Brendan and your team !
Posted by Cathy Desmond at 11:31 PM