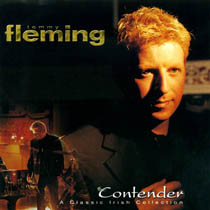 The car park was full to overflowing when I arrived at Glór indicating a  full house for this popular entertainer and I gather he usually packs this venue on his tours here in  recent years.   I had never heard Tommy Fleming  live and my first recollection of hearing him was in an interview with Gay Byrne  following a comeback after a car accident which must have been some time ago now. So I was curious to see what sort of live performer he was and what  factor drew his consistently large audiences.


Tommy opened his set with Dusty Springfield classic I think I'm going back which was marred by poor sound effects which made his voice sound unpleasant and  raspy .   Balance improved in the second number Dream a Little Dream which might have benefited from a more lighthearted approach.  I felt the best numbers in the first half were the pair of Jimmy McCarthy songs which suited his voice and performing style very well .

For me, the strength of the production was in the excellent backing  band comprising David Hayes on piano , Michelle Mason on cello, and two nicely understated guitar players who delivered very classy mellow arrangements of the set list and it was great to see the house grand piano favoured over an electronic keyboard.  The addition of low whistle and accordion in places was very effective and made good use of the backing quartet
While I enjoyed the eclectic set I had some quibbles . The reverb effect was a little overdone in places most noticably in the final number, Christmas 1915, which has been made very popular in Clare by Jerry Lynch . You raised Me Up and Danny Boy are so similar that one or other of them in one evening is sufficient. The pacing of the second half was a little askew. It is hard to follow showstopper, You'll Never Walk Alone with a mellow ballad and this number might have been better placed later in the set.  There  was something not quite right with the housekeeping sequence at the close, with the house lights going on before the musicians had all exited the stage . I feel a hearty round of applause accompanying the musicians off stage should be allowed at least a few moments to subside with maybe another curtain call before the lights go on . Musicians should not be required to scramble to leave the stage before the house lights put a definite end to procedings. A  little moment of blackness to mark the end would seem appropriate to punctuate the return to the everyday world .

Tommy has a very  engaging stage presence and cultivates an irreverent, slightly crumpled , cheeky chap persona, you feel his wrap parties  might be more fun than Daniel's (his are usually held on penultimate nights , his stage patter informs  us  .  He did quite a lot of chatting between his numbers and   not always to set the context of the song.  All the male popular singers I have seen live include yarns about their mammies which I suppose may endear them to a certain section of their audience but a little of it goes a long way.  With such great backing musicians,  I wonder why he didn't include a couple of instrumental numbers to give his voice a rest?

It was good to see the venue full for the first night of this tour and many people remained on to meet the performer who graciously chatted and signed autographs in the foyer seeming in no rush to head off into the very foggy evening, although no doubt he was travelling a distance following the gig.  He and his team have obviously worked  very hard over many years at all aspects of the business, engaged excellent musicians to support him and he does convey a sense of joy in the whole business of performing  which makes him a very appealing performer .
Posted by Cathy Desmond at 5:47 PM