Frankie Gavin is my favourite of the high profile Irish fiddlers.  I like his eclectic choice of repertoire, his enthusiasm for embracing other styles and genres  and I love  his refreshing  lack of pomposity. While I had heard Gavin in Ennis  recently with the high priest of trad,  Tony McMahon, conditions on that occasion were less than ideal and I had never heard De Danann (or De Dannan ) live so I made a bee line for Tulla when the long lived super group played at  Minogue's on Saturday night  as a guest of Frank Hayes' Island Music Club.

Gavin's virtuosity was mesmerising and sitting close to the stage gave us a good vantage point to view the incredible fluidity of his bowing and fingering technique.The band were joined  by singer Michelle Lally who had a  charming stage presence and gave interesting and thoughtful introductions to her numbers which added something fresh to the performance of familiar material.  In relation to the band she was a tad overamplified for the relatively small space . She was most sympathetically accompanied by the band with Gavin content to add lovely understated accompaniment figures often on viola gracefully making way for Cunningham's florid flute lines to soar over the vocals in jazz infused rhythms and Galvin's bluesy chord selection .  While we enjoyed the De Danann hits, with a brand new singer with her own style it was time we felt for less of  the  back catalog and a new set of songs.

There was much to enjoy in the two sets and one couldn't but be impressed with the individual members's musicianship and versatilty . All the signature De Danann  features were present. At the core is the violin and accordion  duet ,  either player never content to merely double a line  plus a quirky song selection  and  an infusion of other genres . Looking very smart in crisp white shirts and black waistcoats, De Danann don't claim to push out the frontiers of Irish traditional music but in a quest to entertain they strike me as being just as ground breaking as some of the more high profile fusion acts on the scene.   Galvin's guitar accompaniments were never overly percussive as with many guitarists accompanying in the trad idiom but always subtle and supportive. Cunningham doubling on percussion and flute/low whistle was a match for Gavin and there was a lovely sense of ensemble between the four players all genuinely seeming to enjoy the collaboration.

A high point for me was Gavin talking about his experience of playing with  Grapelli and attending his funeral before playing a set associated with his collaboration with the legendary jazz fiddler. How lovely it would have been  to have heard some more anecdotes from Gavin's other collaborations and long career but somewhat inexplicably with a mine of stories only he could have told, one of the best fiddle players in the world chose  to tell corny jokes. 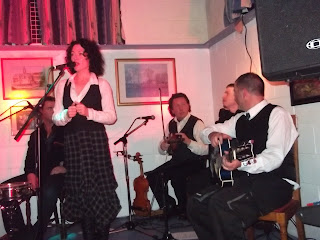 Maybe it was the jokes that had us looking at our watches and noting that the set finished at 12.45 which is rather late I suggest for punters and band members travelling after the gig.  If a listing states that the gig will begin at 9, is it not reasonable to expect that it will begin not much later than 9.30. Afficionados in the audinece included Maeve Donnelly  a virtuoso fiddler herself and it was good to see the venue packed for this hard working outfit who were looking fresh despite being near the end of  32 county tour.  I note the band are off to tour the States. Go n'eirí an bóthar libh.
Posted by Cathy Desmond at 12:06 AM