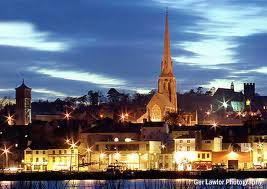 My Wexford Festival Highlights from yesterday  were;

The conference room  in White's Hotel was packed to capacity for the festival production of Puccini's short comic opera Gianni Schicchi. The maximum comic potential was extracted by the  large cast (fourteen including a non singing character) I am delighted to see the surtitles  (absences noted in my  post 2010) have  been reinstalled via two large plasma screen monitors on either side  so we could follow every nuance  in the comic  plot. 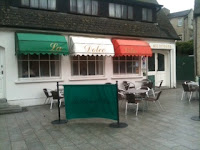 Director Roberto Recchia plays a Hitchcockian cameo as the old man Buoso whose early onstage expiration is the catalyst for the ensuing mayhem.  Recchia's programme note summarises the essence of this farcical plot set in the Tuscan capital, Florence.  ‘Toscanissimo is the evil spirit and the cynicism that pervades the whole work. No one is good here’ -even the daughter Lauretta (played beautifully by Belfast born Marcella Walsh)  who gets to sing the  the plum aria Oh Mio Babbino Caro shamelessly manipulates her father to become involved in the deception which ultimately dooms them all to Dante’s inferno. The title role is played by Tuscan baritone Alessandro Luongo who brings his authentic accent to the role. Musical director Andrea Grant is a firm hand at the keyboard and keeps everything moving along briskly. She spoke to me about the technical aspects of her role.


exuding bonhomie front of house with opera singers Alessandro Luongo and Alessandro Spina fresh from the stage amonst the diners. They were kind enough to speak to me about the opera and I had a brief chat with Roberto before he had to dash back to his kitchen. 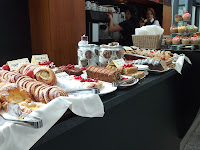 White's Hotel foyer was the traditional  lively hub and meeting point with people coming and going all day.  The self service counter featured the most attractive range of sweet things I have seen for a while and the  customary  range of artists' work adorned the walls. Artist Mick Mulcahy was a new addition to the foyer and seemed to be going for a Tracey Emin look with his installation.

Rowe Street Church was also full for the afternoon concert featuring the Wexford Festival Orchestra with leader Fionnula Hunt.  Visibility was fairly poor from the rear pews but even from a distance young Venezuelan conductor Carlos Izcaray exuded a sense of dynamism on the podium and addressed the audience to set the context of the programme which included a tango by Golijov, a contempory of Piazzola and Beethoven’s  rarely performed second symphony.

We had a lovely day at WFO 2011. As always there was plenty of events to suit all tastes and a great sense of festival activity  pervading throughout the town. I hope to return  before the festival  finishes to see one of the big works. My sources tell me that Maria is the musician's favourite. I look forward to posting a review .

Aix en Provence my review  of a production at the Southern French town  earlier this year.

My party commented that WFO 2011 has a relatively low presence and engagement on social media. The twitter hash tag yielded a scant selection. There is no link from main website to the fringe festival and  while live blogging was trailed,  the most up to date post is 2010 ! The  Board and Marketing Department could take a look at Kilkenny Arts Festival  2011 exploitation of this medium . We found it difficult to get comprehensive  online picture of all the activity  and up to date information and consequently we missed events we would have considered attending . Kilkenny Arts Festival 2011
Posted by Cathy Desmond at 12:12 PM