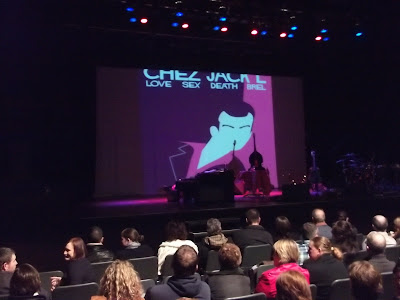 Twirling a cane, Jack L swashbuckled his way through the stalls and bounded onto the Glór stage last night to deliver the first number of his homage to Belgian songwriter, Jacques Brel. Looking rather devilish in a Johnny Depp sort of way  and clad in theatrical black and red right down to his guitar, he was accompanied on stage by accoustic bass, electric piano and drums.

While Jack Lukeman is a charismatic and engaging performer, what set this performance apart was the audio visual element with live action coordinated  with striking animation and images projected onto a backdrop. One might think that this extraneous effect would distract from Jack L's compelling stage presence but for the most part it literally added an innovative new dimension to the perfomance and brought colour to a monocrome performing space. A range of images in different styles assemble and are deployed to great effect, sometimes playful, colourful and sometimes monochrome and mimimalist. Portrait images of cigarette toting Brel  are followed with childish colourful animated images of bullfighgters and the boulevards of Paris are summoned  after a trippy psychedelic kaleidoscope display. Most striking perhaps are the sea scenes for probably  Brel's most famous song The Port of Amsterdam'  (see link below).

Unfortunately some patrons misunderstood the band's mid set  departure  from  the stage and made a break  for the bar when stillness was  needed for a solo accompanied only by a miniature accordion.
Unamplified for the number Stardust Falling,  Jack L demonstrates a powerful voice with  great  colour and range of pitch and I was left wanting more  of the reduced ensemble of voice and piano. Overall, while  the overamplification was not as marked as when I had previously heard the artist at this venue,  some numbers were  too loud for my taste, with drums the dominant musical element in the mix  detracting from the splendid voice and making the all important lyrics less discernible.

Animation for Port of Amsterdam

I hope we will see more of this visual approach to musical presentations. A venue like Glór with good projection facilities makes it particularly suitable and I haven't seen many acts exploit this facility beyond projecting a few abstract images. Brendan Bowyer used  projected  images of his Hucklebuck days to enhance the sense of nostalgia in his show and Gilbert O'Sullivan also used thisapproach. Further afield  Russian  pianist Mikhail Rudy  has caused quite a stir recently in classical music press with his rendition of Mussorgsky's Pictures at an Exhibition to projections  animation of Kandinsky images.  There was a large  loyal and enthusiastic following in Glor for the gig and it was good to have one of the major successes of last year's Edinburgh Festival  in Ennis


Support act Fiach Moriarty provided good entertainment and the audience warmed to his understated set and self deprecating wry humour. His is a sophisticated and distinctive new voice and I look forward to hearing him in a venue more suitable for a solo performer.

An increasing irritant in Glór is members of the audience texting or consulting their mobile phones during performances. The glare is indeed a considerable distraction and nuisance. A gentleman next to me was seething and short of confronting a culprit. Perhaps the venue could address this in their show preamble.
Posted by Cathy Desmond at 8:36 PM