The Glór arts centre was opened in Ennis 2001 in another economic age. Ten years on, the decade of delivering arts in The Banner County was marked with  a gala celebration and a performance of Big Maggie.(Review Below)

Before the performance, Glór hosted a pre-show reception to acknowledge the support of  its various stakeholders; sponsors, friends, local press and Clare County Council. There was a convivial glass of wine and delicious canapés courtesy of Dromoland Castle and Old Ground Hotel with both Mark Nolan and Allen Flynn in attendance. Among the guests, I met Terence Mangan, of Mangan Holdings Bros long standing sponsors, with his antipodean guest Alan Aughney and Madeline McAleer of Clare Focus, Eoin O Neill of the Ceili Bandits and media expert, Ciana Campbell .

Speakers included; Chairman of Clare County Council Tom Coughlan and Garry Hynes of Druid Theatre who stressed the importance of state sponsored professional live theatre and that  she was delighted that her company had featured in 9 of  last 10 years programming at the venue. Val Balance representing the Arts Council spoke of the great record of Glór in delivering live entertainment and he particularly highlighted the commitment of Clare County Council to the arts. The contribution of the outgoing director Katie Verling was lauded and  new director Gemma Carcaterra was introduced by the chairman and she spoke of her delight at assuming the role. The audience boasted not one but two Clare mayors, as Alan Augney the Mayor of Clare in Southern Australia and Pat Hayes the 'local' Mayor of Clare were both in attendance. 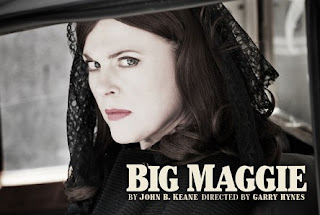 Review of Big Maggie: There was a full house for the set piece of the evening, the Druid Theatre's production of John B Keane's 'Big Maggie'. The play is at the early stages of a national tour, it  recently finished a week in Dublin, and is  selling out in most venues. The eponymous Big Maggie character is a rarity in drama or literature; a malevelont female lead, her blackness exceeded only by Greek anti heroine, Medea. Aisling O'Sullivan dominated the play as she delivered a compelling performance as the grotesque matriarch that overpowered her family. Recently widowed, Maggie is driven by the need to instil independence in her children and to protect  her recently secured financial freedom after the death of her husband. All this within  a   valley  of the squinting mirrors type community when an anonymous letter  updates her an the indiscreet daliance of her daughter. In a brave move (with perhaps an eye on expanding their audience demographic), Druid cast Keith Duffy, the pop star and soap actor, as Teddy Heelin the playboy charmer and he was quite convincing in the role. It was good to see Abbey Theatre veterans John Olohan and Des Nealon among the cast, a blend of youth and experience.  I particularly liked Olohan's performance as as the gossipy stonemason and would-be suitor.

John B Keane wrote Big Maggie in 1969 and whilst as a country we have undoubtedly moved on from the vice-like-grip of church imposed morals of that time, the play stands up well and the timeless tale of divvying up family assets amongst children is a good plotline.

Anne Marie Hourihane, writing in yesterday's Irish Times, claims 'nostalgia is a growth industry in these tough times' and the number of people I met  who claim to have been at the Gaiety in 1969 to see Anna Manahan's legendary portrayal of Maggie Polpin was reminiscent of the legions purporting to be present in the GPO in 1916! It seems that many of the successful  productions we see now are revivals with audiences  seeking to relive theatrical experiences of the past.
There is of course  room for nostalgia,  particularly when it is as well executed as this production. But, I believe current theatre programming in general lacks  the rough edgy sense  of  drama of recent decades when premiers were more prevalent. Is theatre in Ireland in the 21st century 'a glorious anachronism, a form revelling in its own afterlife? as claimed by Fintan  O'Toole in a  recent piece. Where are the Brenton, Hare, Churchill  and John B Keane's of this era who  are not afraid to tackle heavyweight  modern social or political plotlines?  The truth is, I can't think of an Irish contemporary equivalent and yet there is a wealth of good source material.  My impression  is that we look  outside mainstream theatre  for our commentary and satire of the present age.  The success of the recent Kilkenomics Festival, where  relatively young audiences in great numbers paid good money to hear comedians debate with economists might seem bizarre but suggests a demand  for a live forum for airing of weighty topics. Comedian Mario Rosenstock sells out regularly in his solo stand comedy routines lampooning major figures in our contemporary national scene.   Aristophanes must be turning in his grave.
I enjoyed this production enormously.  It was very funny and  I was reminded of some of my own granny's acerbic repartee. The performances  were flawless. Mostly I enjoyed the sense of bustle of a community gathering for the telling of a tale,  the enhancement effect of laughter when it is shared by 400 people all  on the same wavelength, the common talking points at the interval and the party atmosphere and sense of occasion at the pre show celebration . I look forward to more drama at Inis We don't have too wait too long as the finals of the country's amateur one act drama competitions  will be held in Glór this weekend.
Posted by Cathy Desmond at 12:29 AM