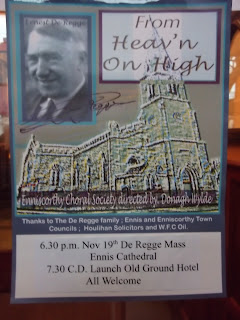 One wonders how the European musicians who came to Ireland in the latter decades of the 19th century and the early 20th century, viewed their new home.  It must have been a huge change from the continental milieus they left behind and how different the musical landscape would be without the input of the knowledge and skills of musicians like Ernest de Regge in Clare, Aloys Fleischmann Snr and Jnr in Cork and  Heinrich Bewerunge in Maynooth .  Ernest de Regge was organist and choir director at Ennis Cathedral from 1923 to his untimely death in tragic circumstances in 1958 in the Carmody Hotel disaster. On Saturday night, Ennis native Donagh Wylde whose late father was a student of De Regge brought his choir, Enniscorthy Choral Society to the cathedral in his home town to sing the de Regge, Plunkett Mass at the 6.30 Mass. The church was full with many present specially for the occasion including Professor de Regge's daughter, Marie Louise and members of the Wylde extended family . Following the service, there was a launch of a CD recording of the work at the Old Ground Hotel with addresses by retired Bishop Willie Walsh, Donagh Wilde and Mayor of Ennis, Michael Guilfoyle . Bishop Walsh in  self deprecating manner recalled his days as a student of Prof. de Regge  at Flannan's College and his days also as a teacher in the same college when Donagh Wylde was one of his physics students.

There were many prominent members of the local musical and business circles at the launch. Carmel Griffin, director of  Colaiste Muire Choir and herself a former organist and director of the Cathedral Choir was among those attending and  was  she said 'very pleased with Colaiste Muire's contribution of some Irish song settings on the recording'. I spoke to choir director Donagh Wylde , clearly relieved and delighted to have arrived at the close of a long process of editing , rehearsing and performing. Donagh commented that de Regge's  composition style was very influenced by plainchant and also Romantic composers such as Weber and most importantly, the choir loved singing the work. Certainly the music is  elaborate in places with difficult four part singing that would not suit for regular worship  but made for a wonderful sense of occasion and resonance with the past. Other former cathedral choir directors present were Kieran O Gorman, Mary Curley and the present director Michael Hennessy.  Nigel Bridge, organist at St Columba's in Bindon Street was also in attendance and Doireann Wylde represented the younger generation in a flurry of organists (a collective noun for organists?) present for the occasion.

I enjoyed the other hymns chosen for the Feast of Christ the King. The gathering  and recessional hymns were stirring, the first a familiar Welsh rugby anthem.  My own music teacher, Fintan O Carroll, director of music at Waterford Cathedral was represented in the psalm setting and Alleluiah and organist Éanna McKenna at the console coaxed a wonderful variety of sounds from what surely must be one of the secret treasures of Ennis, the Cathedral organ. Speaking to Éanna following the event, he said that the Ennis  organ was a historic instrument and was in fact designed by the man commemorated this evening Ernest de Regge.  May he rest in peace. 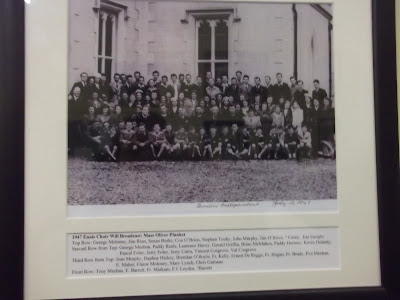