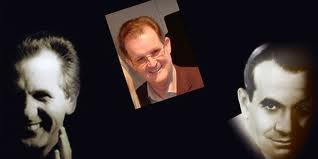 Christie Hennessy, Aonghus McAnally, Al Jolsen
It is said that of all the performers of national and international standing that performed in Glór, the only one that a local enclosed order of nuns invited to tea in their parlour was Christie Hennessy who delighted the sisters with a selection of  hits.  There was a good crowd gathered in Glor Ennis  tonight (Mon) for When Jolie Met Christie, a new musical theatre piece inspired by the life and music of the late Tralee born, singer songwriter,  whose songs have been recorded by numerous Irish artists. I wasn't quite sure what to expect from this tribute show but this was a multi layered and highly entertaining presentation .

The show is based on the premise that Christie Hennessy and Al Jolsen meet in heaven and the iconic jazz singer Jolsen becomes in effect the narrator who charts Christie's jouney through life, punctuated by Christie's songs .  A similar device was used in  the Avignon OFF production of Beethoevn Ce Manouche where the plot is built around a celestial meeting of Beethoven and Django Reinhardt.  Here McAnally's  monologues are a central part of the production rather than just  a device to move from one number to the next. There were resonances also in Sandy Kelly's retelling of the  Patsy Cline biography at this venue.

Aonghus McAnally, well known as a broadcaster shod in blue suede shoes demonstrates an impressive dramatic and vocal  range as well as skillful guitar playing and portrays the egotistical Jolson and the mild mannered Christie with equal facility  The story is a heart warming and compelling one, that of an orphaned illiterate emigrant, turned travelling troubadour who despite terrible travails gradually achieves 'stardom' .  There are many noteworthy elements  to the production directed by Ray Yeates. The set  designed by Robert Ballagh is  effective, the  taut beautifully written script  by Sean McCarthy sustains the pace throughout .  McAnally who delivers a compelling performance, is well supported on stage by musicians Nuala Ni Chanainn  on  violin, vocals , percussion and pianist Ivan McKenna.  The amplification mercifully is unobtrusive and the colour of the string timbres is not distorted. 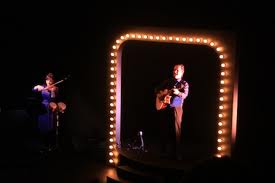 The show opens and closes with 'I am a Star' (Rolling Back the Clouds) and the closing number was greeted by a  standing ovation by the  audience .  In Ennis the show attracted a relatively senior audience. McAnally who seemed positively energised by his experience on the Glor stage spoke to me about the role. You can hear the passion and enthusiasm for his subject in this interview following the show.  Nearing the end of an extensive tour, a few opportunities  remain to see the production in Castlebar, Leitrim, Drogheda and Bray. It is well worth a visit.

Posted by Cathy Desmond at 1:11 AM