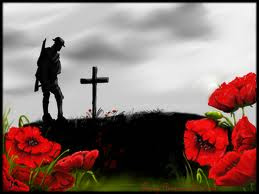 ﻿
﻿   Of all the stages of life, it is in leaving it that we most need the comfort of  rituals. Following on from  All Soul's Day when the  deceased of the parish were remembered*, there was a special Armistice Day service at Ennis Cathedral  remembering Clare's War Victims on 11 the November 2011.  There is no  tradition of formally commemorating  this occasion in the dioceses and this is only the 4th year of this service at Ennis Cathedral.
In our relatively peaceful age, war and it's effects  are far outside the range of experience of my generation. MC Dr. Joe Power  deputising for (Peadar McNamara) spoke about the effect of the war on family members and gave a  sense of perspective of  the impact of the war on the county.  While giving the number of war victims as circa 4000, Joe also made the chilling point that for every dead soldier, there were four who returned transformed by their injuries.  The rolling register of the war dead was displayed on a screen to uilleann pipe accompaniment and included an Arthur Considine from Clarecastle and Nurse Delia Davoreen  from Clare.

Distinguished author and broadcaster, John Quinn evoked very vivid images of  a homesick poet and war victim, Francis Ledwidge both as an ordinary young boy and man but also an extraordinary one. Extraordinary indeed to think of the young poet receiving  a package containing his first published book of poetry amid the chaos of the war front. John quoted from the poet's work and letters home and also Seamus Heaney' Elegy to Ledwidge. He  drew a parallel with another broadcaster the late Cathal O Shannon who went to join the RAF at a young age .
Quinn’s acclaimed documentary on Francis Ledwidge, ‘The Helpless Child of Circumstance’, was broadcast in 1987 to mark the centenary of the poet’s birth. 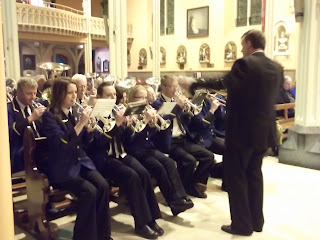 The service was presided  over by Fr.Tom Hogan of Ennis  Cathedral and Rev. Bob Hanna of St Columba's Anglican Church with members of the Limerick branch of the British Legion present wearing their medals.  Clodagh Power's playing of the Last Post on cornet  perhaps best evoked the zeitgeist  of the day.
I caught up with John following the service and you can hear one of the most distinctive voices in  Irish  broadcasting in this recording.
The service was a fitting memorial for the thousands of Clare volunteers who perished or who were damaged  on European battlefields. 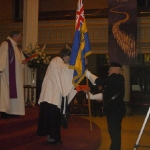 HE shall not hear the bittern cry
In the wild sky, where he is lain,
Nor voices of the sweeter birds,
Above the wailing of the rain. 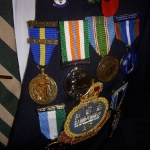