An Enemy Of The People at the Gate 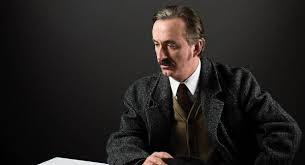 A new production  at the Gate Theatre in Dublin opened this week-Enemy Of The People the Ibsen play adapted by Arthur Miller. The play was written nearly 140 years ago by the Norwegian in this production  is set in a 50's America. The plot concern a scientist in a small town whose discovery of poison in the local water supply threatens to spike the growing tourist trade. The town is Kirstin Springs and it is complete with a cast of pillars of society; journalists, publisher, factory owner and mayor (wonderfully played by Denis Conway). The scientist Dr Stockman is played  by Declan Conlon who  grapples with protecting the truth of his discovery against the gathering townsfolk that wants to conceal his findings. 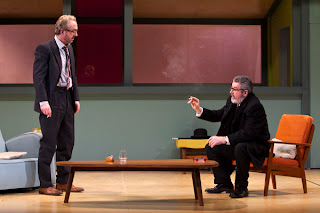 The first act of the play opens at your average dinner party when Stockman is in middle class heaven hosting his friends and family from his community. This is the inverse of what is to follow.
The second act is very dramatic and effective as  director Wayne Jordan places the supporting actors amongst the audience in the theatre as the characters appeal to the masses. The extended cast deliver a rabble rousing meeting from amongst us.
In his notes, the director describes Ibsen's work as a parable play. And it is. It isn't hard to find resonances in contemporary Ireland  among the cast of characters . An obvious comparison could be made to those who pointed out flaws in the recent Irish disastrous business model of  property development and those in authority who derided and denounced them for doing so! This production is highly recommended.

Venue Notes:
At €25 minimum the ticket price is expensive. On the night we visited the venue was not full. Some imagination in ticket pricing might grow revenue and get more people in.
It's always a treat to visit the Gate and we loved the walls adorned with pictures of previous productions and the lovely china cups for your coffee.