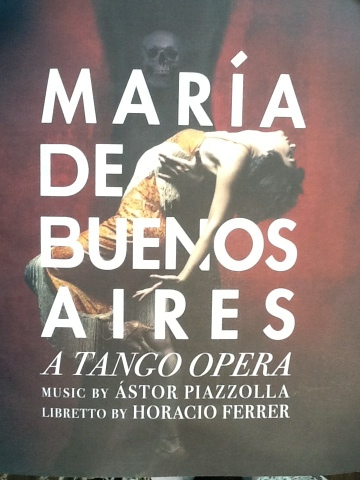 Musical director, John  O Brien has been pivotal in spectacular and innovative opera productions in Cork in recent years. Pagliacci was a highlight of 2012 season and we also loved the heavy metal Dido and Aeneas for which, I gather, he also designed the sets. So we made a bee-line for Maria de Buenos Aires part of the Midsummer Festival programme at Cork Opera House for which he was part of the directorial team. On paper, the work subtitled 'A Tango Opera' by Argentinian composer Piazzolla seemed to have all the ingredients to  make it a hat trick of thrilling opera productions from this director.  And  there were indeed many enjoyable and  incredible aspects to this Maria that made it a very interesting evening  but it won't feature in my top picks of the year.  Why did the whole did not add up to the sum of the parts. Here is  my best and the rest of Maria de Buenos Aires at Cork Opera House.

The thrills:
The international ensemble of musicians performed the most amazing feats of memory and skill and as in the aforementioned productions, playing without the aid to memory of notes and moving around the stage as part of the action. Cork percussionist, Alex Petcu created the dream like mood on marimba. Ville Hiltula from  Finland added the hallmark bandoneon part. Niwel Tsumba was a lynchpin on  guitar. There were just two singing roles, both in the lower registers adding to the darkness of mood. Both were compelling, doing justice to Piazzolla's strange and beguiling score, combining traditional elements of the dance form with modern compositional techniques. Portuguese baritone, Nuno Silva had a beautiful and unusual voice and together with local girl, Una Palliser's sensuous violin lines, would have been worth the excursion alone.  The lighting  and set effectively transported us from the murky Leeside evening to a sleazy Latino waterfront bordello and the sound was perfect, amplification effective but not obtrusive. So far so sizzling. So why did it all fail to catch fire for me?

The spills
To misquote Emperor Franz Joseph-, there were just too many words.  The plot could be summed up in a few lines.  Maria, embodiment of the spirit of the tango is born in the slums, seduced by the dance, led astray by it, meets a bad end, dies and is reborn. Or something to that effect. To convey this flimsy plot we have seemingly endless declaimed monologues by actress, Olwen Fouere   in full Beckettian  mode in  the androgynous role of  El Duende, a mythical poet narrator figure. A case of too 'much a Duende  about' too little plot, for me, I fear. I did love her bar room soliloquy to Maurice Seezer's piano in the second half which reminded me a little of Peggy Lee's Is That All There Is' but less of this aspect of the production  would  have been more.

The  choreography in an effort to blend contemporary, ballet  and traditional forms resulted in the tango ingredient being somewhat decaffeinated  and not quite the central element I might have anticipated given the subtitle of the work.
So to sum up -seductive singing , mesmerising musicianship but too much talking and not enough tango action  on the dance floor for me from this Latin Maria but  well worth seeing .

My review of Pagliacci at the Everyman here http://cathydesmond.blogspot.de/2012/06/pagliacci-for-everyman-cork-midsummer.html 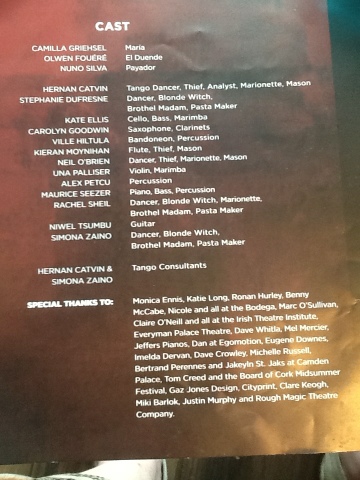 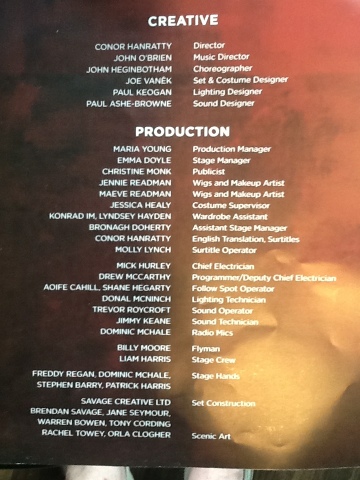 Posted by Cathy Desmond at 8:07 AM