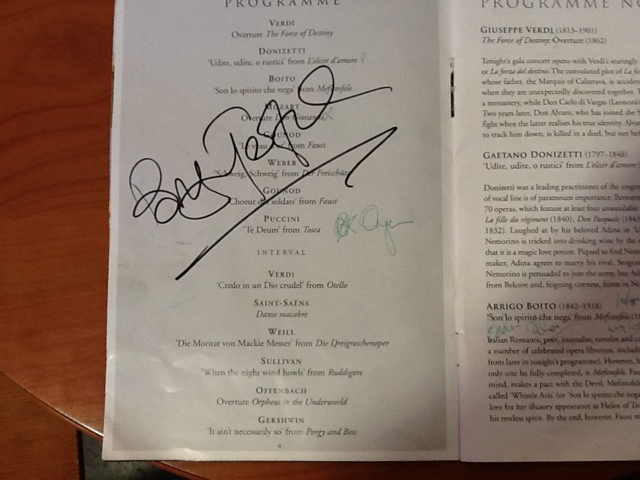 Just in from hearing  singing sensation, Bryn Terfel at the National Concert Hall. The acclaimed Welsh bass baritone appeared with the RTE Concert Orchestra as part of its' Signature Series.    Supported by the Goethe  Institute Choir , Terfel was in fine form in a programme of operatic favourites. The first half programme was the most satisfying, mixing well known Romantic arias with a rarely heard whistling aria from Mefistofele by Boito, better known as a Verdi librettist. For an opener, he had  a lot of fun with a drinking song from L'Elisir d'Amour chased by  a couple of swashbuckling arias by Guonod and Faust . He was at his best in the darker more menacing numbers and as the malevolent Scarpia made us all gasp with the chill of it all.l He announced each item with a a nugget of pertinent information in beautifully enunciated tones and there were the odd reference  to manly pursuits like farming and rugby for the lads. 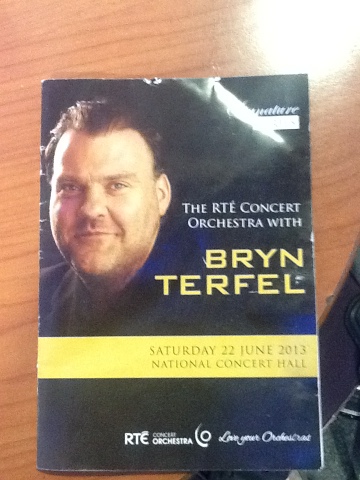 The Gothic mood of murder and mayhem prevailed in the second half. The highlight was the sinister opening 'Credo in un Dio crudel' from Verdi's Othello.  I shudder even now at the memory of it.  Premiered in the same year 1887, we heard Sullivan's parody of Wagner's Ride of the Valkyries.
The programme had nine arias with one encore, padded out with  by a selection of orchestral numbers, These were well executed by the RTE Concert Orchestra under conductor Gareth Jones, with a souped up trombone and bassoon section adding extra oomph  to the blood curdling mix. The programme notes inform us that the specially tuned violin for Saint Saens Dance Marcarbre is a scordatura, a delightful detail.  The solos in the Offenbach overture were beautifully played by Mia Cooper and her colleagues. Alll very good but it was  a bit overladen with overtures . It was like having several soup courses when you just want to have main course and maybe an encore for dessert. Much and all as we love the Concert Orchestra. two would have been ample and it was the singer and the  songs that drew people from all over the country on this particular occasion.

And what a singer. Although I've long been a fan, it was my first time to see him live and he did not disappoint. The voice was wonderful of course. If they had opened the doors you would have heard the fortissimos at the bottom of Grafton St.  Superb technique combined with a powerful physical presence ( ie a hunk) totally at ease on the platform, Terfel is a performer on top of his game making it all look so effortless, a joy to witness in the flesh,  so to speak!  Attired in a black velvet smoking jacket, Bryn arrived to meet and greet the long line of fans waiting in the foyer  after the concert.

There were good programme notes by Julian Haylock but why no translations ? This wasn't an amateur do in the village hall but a premier high price ticket event and I expected the budget to run to inclusion of texts and translations. Strangely, the opening item was bizarrely listed as 'The Force of Destiny' Overture.

Who we met : There was a full house  and among the patrons we met  Dulcet, Waterford's own three soprano outfit. you can hear my interval interview with the girls in the audioboo, a mix of comments on the singing technique with some phoaar! noises. I enjoyed chatting to Victor and Victor, both ex cathedral choirboys and G&S fans. Their highlights were the Sullivan number and the encore, Stars from Les Mis. Broadcaster. Evelyn Grant cited the quality of his diction as the facet that sets him apart and certainly, every syllable was audible in the middle stalls. Cellist, Adele O Dwyer, host of the Tullamore Cafe Nights , had forsaken the big hurling clash in her home town to be there .

listen to ‘Dulcet at Bryn Terfel ’ on Audioboo
Posted by Cathy Desmond at 7:38 PM