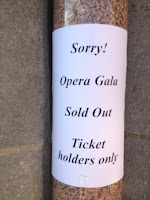 Thursday 30th May was, it was generally agreed, the first glorious day of Summer 2013.  The sighting of sunshine in Phoenix Park was a rare enough event to warrant mention in morning news reports on the opening  day of Bloom Garden Festival where a Waterford garden  took first prize. That evening, I was in the violin section of the WIT Symphony Orchestra for the season finale concert of the Waterford Male Voice Choir. The house was sold out days in advance -another rarity.  The concert marked the farewell to the ensemble of Niall Crowley who has steered the ensemble since its inception twelve years ago. There was a strong element of collaboration in the venture as the choir invited singers from local ladies choirs, Voci and Edmund Rice to join them for the final chorus of this auspicious occasion.

The programme of operatic repertoire was bookended with numbers from, Maritana by William Vincent Wallace, the Overture and the Angelus Chorus. Wallace was born in the Suirside city and local cognoscenti have never let the minor detail of him moving before he'd had a chance to take his first faltering footsteps on the Quay or learned to butter a blaa, deter them from claiming him as our own.  His bust presides over the forecourt of the Theatre Royal, drawings of him adorn hotel lobbies and no gala  is complete without something from his Victorian oeuvre adding a grand  dollop of nostalgia to any such occasion. Guest soloists,  Bridget Knowles, Roisin  O'Grady and Eoin Power presented well known arias and duets from the standard repertoire. The gentlemen of the choir were variously soldier, priests and pilgrims in operatic choruses by Guonod and Mozart and Wagner. A highlight was the Huntsmen Chorus by Weber with splendid playing from the quartet of French horns. Star of the show  was a real life anvil for the famous chorus from Verdi’s Il Trovatore. I don’t think I’ve ever seen an anvil in the flesh so to speak and my only quibble is that such a novelty could have been more clearly displayed and afforded a more theatrical flourish.

I rarely get  the opportunity to play grand operatic repertoire and very much enjoyed working with Niall Crowley on this project.  It was good  to reconnect with friends and  former colleagues in the orchestra led tonight with her customary authority by Teresa Costello.   Niall passes the baton to Cian O'Carroll and we wish this ensemble of stouthearted men and their new director well in their next season of musical endeavours.

Come the Sails. Launch of Tall Ships Waterford A View from the Plaza

Posted by Cathy Desmond at 3:28 PM