The streets were alive with the sound of music in New Ross on Sunday afternoon .  Everywhere you looked, clusters of suited and gowned choristers were clustering around the two performing venues in  the South East town. Outside the Theatre Tavern punters warbled over their pints and the smell of salt and vinegared chips was in the air.  Over the course of the weekend, 1000 singers of all ages  descended on the small town on the Barrow for the AIMS Choral Festival  to compete in various competitions . In contrast to the grand cosmopolitan air of the Cork Choral Festival , New Ross is a down home day trip event with the feel of a cosy knees up in the parlour. 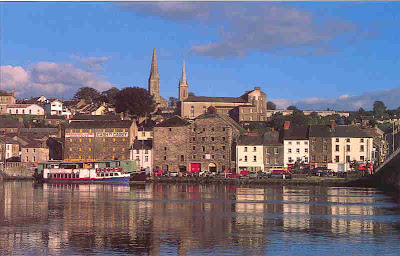 My first stop was the Church of St Mary and St Michael where  Cork Airport Singers with conductor Anne Healy Mayes opened  Competition A for  part songs for large mixed choirs.  Outside,  gospel choirs were limbering up for a dedicated competition. Perhaps due to the clement weather, there were more bodies outside than inside the venues.

There was a younger profile in delegates at St Michael's Theatre for an afternoon of musical theatre. It was good to hear The Treaty Scene from Michael Collins by Waterford writer, Bryan Flynn  from the Teachers' Musical Society among the selected numbers in the Musical Cameo competition. I regret that I haven't yet seen any of Flynn's stage musicals. Lovely  also to hear a trio from Rush  close the singing with a delightfully old fashioned Gilbert & Sullivan number, Never Mind the Whys and Wherefores'. A very entertaining afternoon all for a modest €4 to cover the programme. It is rare pleasure to hear musical theatre un amplified and this bijou venue was ideal in this regard.

There was a bit of a frisson as it was announced that admission to the adjudication would be by special pass only and there was  a clamour  in the forecourt for the few available tickets. Albert Bradshaw  commented on the staggeringly high standard. and complimented the accompanists who  executed some 'viscious' scores with 'polish and élan' One hard pressed pianoman accompanied 15 numbers before rushing off to a gig in Dublin.  'Respect the score' was Patrick Devine's advice and the Maynooth academic  was encouraged by the resilience of the event in the recession.

High spirits prevailed on the street as splendid silver trophies were lifted and huddles formed to pour over reports. Most jubilant of all were Carrick on Suir Musical Society . Although not placed for their fine male chorus rendition of Officer Kruppee- undaunted,they followed their leader,  Liam Butler  down the street as he held his  tea cup aloft, singing all the way.

Note to organisers: No results to date posted on website.