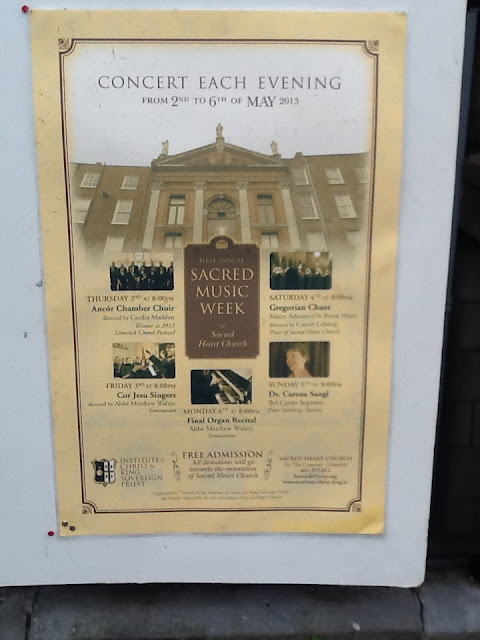 'If that's what heaven is going to be like, I want to there' declared one satisfied listener following the opening concert of a week of  concerts at the Sacred Heart Church in the Crescent, Limerick. Stepping inside the recently reopened church,  I wondered at first if I had stepped into a dress rehearsal for the Sound of Music  given the presence  of nuns in old fashioned habits complete with starched wimples . The church was purchased last August by an Italian religious community  dedicated to traditional forms of liturgy who have taken on the task of restoring the former Jesuit church which is back in use after seven years . Further details from the Irish Times here .

Local award winning* chamber choir An Cór  under conductor Cecilia Madden presented a programme of sacred music from Renaissance to Romantic periods. Cecilia Madden and Chloe Heslin offered a Purcell chaconne as a instrumental interlude. There was an leaning towards French repertoire with pieces by Duruflé, Guonod and Fauré included in a programme.

The series continues nightly at 8pm concluding with an organ recital on Monday evening by tonight's accompanist, Abbé Matthew Walter who adds further to the considerable pool of organists in the Limerick area between two cathedrals, Glenstal Abbey and the Redemptorist church to name just a few venues. Organ fans may like to note the next concerts from the Irish Chamber Orchestra are titled Steeplechase and will feature the instrument in various churches. The Limerick concert takes place in St Mary's Cathedral on Thursday 16th May and features organist of St Mary's Cathedral, Peter Barley

*An Cór were awarded Best Sacred Music Choir and Best Limerick at the 2013 Limerick Choral Festival.