Although I have travelled far in pursuit of excellent arts events, some of the best events were right on my doorstep in Clare. Here is my personal selection of the highlights of 2011. Click on the highlighted text for my review. 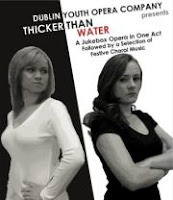 Best Songwriter Thom Moore at Island Music Club. This is tricky, on one hand  Declan O Rourke, writer of my favourite 21st century song ever brought his Mag Pai Zai tour to Glór but after some deliberation my prize goes to Thom Moore after his charming gig at Minogues, Tulla as a guest of the Island Music Club when we were reminded of how many hit songs he wrote for other performers.


Best Blues   Johnny Fean House Shakers Blues.
Well ok.  I didn't hear very much blues and I am not  particularly a  fan but I enjoyed this gig at Shannon . In fact I heard Fean twice in 2011, the second gig with bass player Stephen Travers. If anyone could make a case for the Blues, Johnny Fean could. Catch him at his Limerick gigs

Best Trad Gig Zoe Conway John McIntyre at SMB Folk Club
A pleasure to hear unamplified music of any genre but Zoe and John McIntyre were charming at the Courthouse as guests of the Sixmilebridge Folk Club. Superb violin technique and charming songs and a mix of genres with sympathetic guitar accompaniment. An accoustic delight.
.

Best Ensemble: Cornets by candlelight  Ennis Brass Band
Vladimir Jablokov brought his quintet to Glor as part of the Classical Twist tour and was my favourite small ensemble of the year
There is something thrilling about the sound of brass instruments en masse and the Ennis Brass Band are a super enesemble.  Even if they were only half as good they would still be my pick. I admire very much their sense of civic duty and they remain an honest to goodness marching band getting out in all weathers to cheer  Ennis folk. Listen back to the post concert interview with PRO Darragh McAllister in my report. I was very proud to be a guest performer at their 40 th celebration concert. Long may they prosper.

Best solo artist Peggy Seeger
Peegy Seeger , a living legend was simply extraordinary at the Courthouse as a guest of Sixmilebridge Folk Club. Witty, charming and playing a fascinating collection of instruments.

Choral   The Lismorahaun Singers gave a super Christmas concert at Bindon St and The Limerick Choral Union gave their best Messiah yet but   my pick was  the performance of Vivaldi's Gloria to mark the occasion of the 150th anniversary of Coláiste Muire with the school Choir and chamber orchestra conducted by Carmel Griffin and soloists Helen Houlihan and past pupil, Ruth Kelly.  The evening concluded with a reception for the many guests, former staff and students. A memorable  experience for my daughter a chorister, and  me personally as a musician not least for Peter Sebestyen's impeccable cello continuo lines.
Colaiste Muire Choir director Carmel Griffin Vivaldi Gloria

Theatre
Best Audience  All Ireland One Act Drama Finals. Ennis Players hosted this very successful  niche festival and did us  proud. Great also to see Glor full for the weekend

Druid Big Maggie.  As part of the 10year anniversary celebrations,  Druid brought their highly successful production of Big Maggie to a packed house at  Glor.

Musical   Oliver by Lionel Bart remains one of my favourite shows and Ennis Musical Society under musical director, Martin Moloney did a splendid job with this dark tale of Dickensian London, with an amazing amount of kids on stage and strong leads.  No blog  post as I was too busy fiddling .

Dance
The Dinan School Annual Show  Over the Rainbow was bright, cheery and  colourful.  T'would make you want to take up dancing, - now where did I put those tap shoes

Visual
Christy McNamara's striking black and white images of vanishing Ireland can be seen in various locations in Clare. A collection of his work on the theme of music and musicians made a perfect backdrop to live music events at the Courthouse, Sixmilebridge during the Winter Music Weekend.  Best of all you can peruse Christy's work during the interval while partaking of tea and Ahern's excellent porter cake.

Posted by Cathy Desmond at 8:53 AM